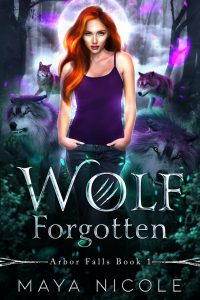 All I wanted was to find answers to who I was.

No one knew who had abandoned the gray-eyed baby with fiery red hair and a cry loud enough to make a man’s nuts retract.

I moved to Arbor Falls to find myself. Little did I know I’d be thrown into a world I didn’t know existed. A world with wolves at each other’s throats and enough pack politics to make my head spin.

Then there’s the fact that I have more than one mate. Not all of them accept me because there’s one gigantic problem… I’m not what they expected.

I did it. Four years of undergraduate and two years of post-baccalaureate studies, and I was finally done with school. Ivy Taylor, Master of Environmental Science. It had a nice ring to it.

It had been a lot of work to get it done in six years, but now, at twenty-five, I was done with school and could start living my life and helping save the world at the same time.

“Ivy!” My best friend, Riley, came from behind me and wrapped me in a hug. “Congratulations!”

“I’m so glad you guys could make it.” I returned my friend’s embrace and then hugged her three men, taking the flowers Blake held out to me. “Thank you.”

“We’re proud of you, Ivy.” Jax gave me a sincere smile, and for once, I didn’t feel like kneeing him in the balls. “It feels like just yesterday you were-“

“Jax, now’s not the time for ridiculous speeches.” Riley laughed and patted his chest. “Wait until we get to the restaurant.”

Morgan slung his arm around Riley’s shoulder and pulled her into his side. “I thought there was a party.”

I rolled my eyes and looked around. “Did you see my parents?”

“I looked for them and texted, but they never responded.” Riley bit her lip and shifted from one foot to the other. “Maybe there was really bad traffic.”

I took my phone from my purse and turned it back on. I had three missed calls from my aunt and uncle. I frowned at the screen and returned their call.

I sat down in my dad’s office and looked around the space. When I was younger, he’d always let me sit on the small sofa and read while he was working. Now, the room was bare besides the desk and chair. They held too many memories for me to sell.

When I’d left for college, my parents sat me down and told me their wishes and explained where to locate important documents. I thought it was ridiculous, because who wants to talk about that with their parents when they’re still so young, but now I was grateful.

I’d always known my dad had a locked drawer in his desk, but figuring out where to find the key when I was younger had been impossible.

I took the key I found in the top right drawer of their dresser and unlocked the file cabinet drawer in the desk. It squeaked as I pulled it open, as if it hadn’t been opened in a long time. I raised an eyebrow at the single folder inside.

Riley knocked gently on the partially open office door. “Hey, we’re going to head out. We’ll be back tomorrow at six.”

I nodded, pulling the folder out and putting it on the desk. It wasn’t very thick, but whatever was inside held weight.

“Are you sure you don’t want to come stay with us for the night?” Riley pushed off the doorframe she was leaning against and came to stand by me. “That’s all that was in the drawer?”

She put a hand on my shoulder as I opened the folder. I picked up the top piece of paper, and my hands began to shake as I read Certificate of Finding of Unknown Child at the top.

“What the hell?” Riley took the paper from me as my entire life flashed before my eyes. “Did you know about this?”

The paper had to be wrong. There was no way they weren’t my biological parents. They had never said a thing about me not being theirs. Sure, I had red hair and they didn’t, but the one time I’d asked about it in elementary school, they’d taught me about recessive genetic traits.

“No.” I looked down at the next piece of paper, not wanting to find out more, but needing to. “Why do I have a birth certificate with them listed as my parents?”

“I think that’s what happens when you’re adopted.” Riley put the paper she was holding on the desk. “Is that all there is?”

Shaking my head in utter disbelief, I looked at the paper again and tears filled my eyes. It didn’t matter, but if I really was adopted, I had deserved to know a lot sooner. Had they even planned on telling me at all?

I moved the birth certificate and found a newspaper clipping from the Arbor Falls Gazette. “This can’t be happening.” I choked on the words as all the information collided in my brain. I lifted the folder and shook it, hoping there was an invisible paper that would say it was all a sick joke. There were no other papers.

I was adopted. Twenty-five years old, and I was just now finding out my entire life wasn’t even the one I was born into, and my parents hadn’t bothered to tell me.

I handed the paper to Riley to read as my vision swam with tears. “Baby girl found abandoned in ivy bush outside clinic entrance. Anyone with information is urged to contact the Arbor Falls sheriff’s office.”

“Ivy… that’s how I got my name. I was abandoned in a fucking ivy bush.” I put my face in my hands. “Why didn’t they tell me? How could they not tell me about something like this?”

Riley leaned against the desk and sighed. If anyone had some perspective on why parents kept important, life-altering secrets, it was her. “Would it have mattered if you’d known?”

I moved my hands and looked at the three papers. “It’s who I am. I could have a whole other family out there. There could be genetic abnormalities or illnesses that I need to know about.” I bit my lip to stop myself from bursting into tears in front of Riley. I’d drowned her in my tears enough already.

“You could have another family out there somewhere.” She stood and then leaned down to wrap her arms around me. “But is it a smart idea to try to find them? Especially right now after losing your parents?”

Probably not, but what did I have to lose?