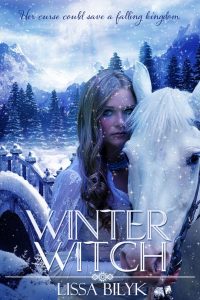 That’s what the townspeople whisper behind her back. But outcast Tally Bane ignores the rumours, keeps her head down, and quietly moves on. For she is not just a winter witch, scorned for her magical ability to summon winter and cursed with death’s touch, but she also carries a horrible secret: her touch can bring the dead back to life. If anyone knew, she would be instantly put to death as an abomination.

Unfortunately, as a winter witch, she’s exactly what the king wants. On her eighteenth birthday she is conscripted, and given a choice: live in the royal palace and become the crown prince’s personal bodyguard, or head to the front line of the losing war against the barbarian highlanders.

Choosing the former, Tally finds herself unprepared for her new life learning to be a royal bodyguard. The not-so-handsome Prince Ford with the twinkling eyes and easy smile might just give her a reason to stay, as well as his very close group of brothers-in-arms, including the infuriatingly handsome best friend, and the brooding giant with the gentle hands who trains her to fight back. As she learns to trust them, their investigation into Tally’s forbidden power uncovers secrets and conspiracies that lead all the way to the top.

But when summer witches start dying in the palace, all evidence points toward a winter witch’s involvement. Someone wants Tally to take the fall. And to find out who, she needs to embrace the one power that, if exposed to the wrong people, would mean her own death.

**WINTER WITCH is a full-length, medium-burn Reverse Harem novel. There are steamy scenes, super hot protective men, and there may or may not be a cliff-hanger.**

“Hey, lass,” Dover said, his deep voice soft and gentle. “You’ve been asleep for ten minutes. Ford thinks you deserve a better bed than the decorative welcome mats of the palace floor. And maybe you don’t want the entire palace knowing you snore.”

“I don’t snore,” I protested, snuggling into Dover as he walked away from the crowd with me in his arms. The blood on my uniform smeared against his grey tunic, and my hands and face felt sticky.

“Don’t you worry about that right now,” Dover replied.

“I have to,” I insisted, forcing my bleary mind to focus. “Who were they? Why did they attack us? They tried to kill us – they nearly succeeded.”

“Yes, it was very lucky for us that you were with Ford at the time of the attack.”

“We’ll discover all that in the morning. In the meantime, you need to rest. Ford said you killed three men tonight. You must be exhausted.”

“I’m not,” I said, but I was unable to stop the huge yawn from accompanying my false words.

Dover smiled. “Stop being stubborn. You’ve done your job. Now let everyone else do theirs and look after you.”

I closed my eyes, and when Dover opened a door I peeled them apart to see a very different room than the one I was expecting.

“Why did you bring me to Ford’s apartment?”

Dover set me down on the sofa. I gripped his arm, trying to look serious.

“Ford asked me to bring you here.” He pried my fingers from his forearm. “Tally, listen to me. Go and get cleaned up. Ford is dealing with those assassins, but he’ll be here when he can. None of us think you should be spending the night alone.”

I got to my feet rather unsteadily and eyed the sofa I’d just vacated. I guess it would be comfortable enough to sleep on.

“Why is everyone else making my decisions for me?” I grumbled as I went to walk past Dover.

He placed a meaty hand on my shoulder, the one covered with blood.

“Because we care, lass.” He gave me a gentle squeeze then sent me off to the bathing room. I threw a look over my shoulder. He stood next to the door with his massive arms crossed over his chest, looking intimidating. Even I didn’t want to argue with him.