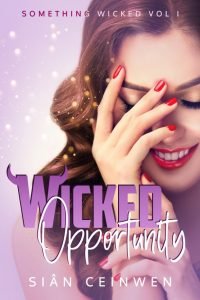 Why have one rock star, when you can have three?

I’ve been in a relationship with Wicked Stallion’s bass guitarist, Dante, for almost ten years. We finally got married last year and he has my heart and soul. To the world, we’re #couplegoals.

I never imagined I could have more, but then I take the role of Nate’s love interest in the band’s new video clip. We’re just supposed to pretend we’re in love for the video, but I know Nate’s not-so-secretly been in love with me for years. How can I resist him when he’s singing about how into me he is, and Dante encourages us to indulge ourselves?

Then there’s Logan, the drummer. My quiet friend who is surprisingly Dominant in bed. He’s a man with impeccable timing both in and out of the bedroom and, according to Nate, he has a gifted tongue.

Why choose between three men I love equally?

The only downside? My best friend, Cassie, who’s dating the band’s lead guitarist, Ashton. She isn’t happy for us and it’s causing trouble. Will my happiness with the three men I love tear the band apart?

“Hey, Lexi, I need a love interest for our next music video. Want to bust out your acting skills?” Nate nudges me to get my attention as he says this.

I look at him and laugh. “Can they not find an actress willing to work with you? Or did you already sleep with the one they chose?”

“The second one”—he grins at me—“besides, you’re hotter than she is, anyway.”

“Well, thanks for the compliment, but what will the fans think if I’m in a music video grinding away against you when they know I’m Dante’s wife?” I raise an eyebrow at him.

“They’ll probably just think that Dante’s very nice for sharing you with me.”

Nate gives me a cheeky grin, and Dante’s deep laugh comes from behind me before he says, “I really am nice like that. If you want to be in the music video, Lexi, that would be okay with me. It’ll be great to have you on set with us.”

So, I know that Nate is in love with me. Everyone in our group knows it, I think, even Dante. We don’t talk about it. Nobody does. If we don’t talk about it, we can be friends. He makes these jokes about having sex with me, which is probably unhealthy as fuck. I’m not sure why I indulge him, I guess because it’s fun.

He treats me like I’m his girlfriend, and I love him like he’s my boyfriend…that I don’t have sex with. I never would. Because I love him to death, but my heart belongs to Dante and always has. By the time I realized Nate was in love with me, we were about a year into dating.

I’m not sure what gave it away, but I distinctly recall when I figured it out. He’d picked up a woman, and we were all out at a club on a night pretty much like this one. Dante was sitting next to me, and Nate was on the other side with the woman next to him. He kept talking to me, asking me questions. There was nothing strange about it, but he just looked at me, and I realized.

I don’t know when everyone else figured it out because nobody talks about it, but I know they all know. Which is why I’m surprised by Dante’s reply to the suggestion of me playing the role of Nate’s lover.

I whip my head around to look at Dante. “Really?”

“Sure. I think you should agree to be Nate’s love interest in our music video, Angel.” He smiles at me, and my eyes widen.

I’m wet, and I don’t know what exactly about this whole thing has me turned on, but I know an instruction from Dante when I hear one, so I turn to look at Nate.

“You’ve got yourself a love interest, I guess.” I smile at him.

He allows his gaze to roam over me from head to toe, and I can feel it in a way that I never have, despite the fact he’s done it to me a thousand times before.