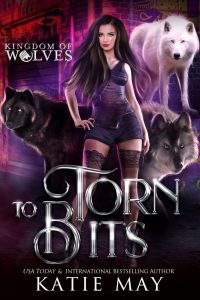 One prisoner, three warring, psychotic princes, and ninety days to choose between them…

Or claim them all

And Lycans rule the east.

As the lone Bitten faction, we’re considered a dying race. Relegated to the dry south, we’re predicted to only last a few more years before complete annihilation.

Until the three gangs that rule our city—unbeknownst to the humans—offer an ultimatum: me for our pack’s survival.

From the cold-blooded werewolf prince, to the playboy feral, to the aloof Lycan.

They think I’m prey—nothing more than a plaything for them to discard.

They’re going to find out that I’m their queen, their alpha, and it’s time they bow to me.

“Blair, wait—” Papa Gray begins, but I don’t hesitate, shredding my clothes and my favorite T-shirt of all time as I allow my wolf to take over. In my wolf form, I’m approximately the size of a small horse, my fur a luscious brown highlighted with gold, just like my natural hair. Despite my unnaturally large size, I’m the fastest wolf in our entire pack. And the strongest.

I could easily fight Papa Gray for the position of pack alpha, but I don’t want that responsibility. I’m many things, but a leader isn’t one of them.

My paws beat against the ground as I race in the direction of the enraged growls and pained whines. I can only pray that my packmates are winning.

When I arrive at a clearing, just at the outskirts of our camp, it’s to find one of our younger guards, Darren, being held up by the scruff of his neck by an older man with thick black hair and tan skin. One sniff confirms he’s a totemic wolf.

A member of the cleverly named Totemic Tribe, just to the north of us.

Opening my jaws as far as they will go, I throw myself at the pathetic man and clamp down on his neck. Hard. His dark eyes widen in his face as blood squirts from the opened wound, darkening my fur. I pull until I hear the satisfying snap of tendons and his head rolls to the side, illuminated in the pasty, starlit night.

“That’s enough!” The voice is cold, strident, and unflinching.

I immediately bare my teeth, a growl reverberating through my body, as a figure stalks through the trees. I recognize him as another totemic wolf instantly, though something about his smell seems off. Almost…sweet. Addictive.

I shake my head rapidly from side to side as he steps into the clearing, giving the fallen wolves a dismissive once-over. His eyes flicker to the dead totemic I’m standing over, and something hardens in his gaze for just a brief second.

“We just came here to talk,” the man continues in his honey toned voice.

“By killing my wolves?” Papa Gray demands as he staggers into the clearing, leaning heavily on his wooden cane. His shrewd eyes are anguished as they land on Jerri, the only other causality of this attack.

“It was an…unfortunate accident,” the newcomer responds curtly.

The shift fizzles over my skin before I can stop it. One second, there’s a seventy-pound wolf standing beneath the low-hanging tree branches, and the next, I’m me again. I level the asshole with a glare capable of making a lesser man shit himself. But this wolf…

He’s not a lesser man.

I don’t bother shying away from my nudity as I swagger forward, my hips swaying and my breasts on full display. I watch as his eyes instinctively dip to my pert nipples before he forces his gaze back to my face, a scowl marring his features.

I can’t help but notice that he’s ridiculously handsome, just like Vincent. And also like Vincent, this man screams danger, though his type of danger doesn’t feel nearly as cold as the mobster I shot at. A black, form-fitting shirt conforms to his muscular chest and shows off every chiseled line of his eight-pack. Tattoos line the bronze skin of his arms before curling up his neck. I imagine he has tattoos on every inch of skin available, and that shouldn’t appeal to me as much as it fucking does. His hair is dark, appearing almost blue in the starlight, and is cut short on the sides with a longer, wavy strip directly on top. He’s sex on a stick, my wet fucking dream…

I continue moving until I stop a few feet in front of him.

One of the wolves he came with, a man only a few years older than myself, releases a low whistle. A wolf whistle—get it? Snort.

Immediately, Sexy releases a savage growl, whirling around to face his fellow pack member with a murderous expression on his face.

“Shut the fuck up, Paiter,” Sexy—because now that I started with the nickname, I can’t stop—hisses. His friend pantomimes zipping his lips shut and throwing away the key.

“Who the fuck are you?” I demand, crossing my arms over my chest and forcing all eyes to fall back on my breasts. Only Papa Gray doesn’t ogle me, as he purposely stares over my shoulder at the newcomer.

“Put a damn shirt on!” the man hisses as his packmates continue to leer. When I don’t immediately respond, continuing to glare at him with blood dripping down my naked body, the man rips off his own shirt and hands it to me with a glare.

I eye the shirt like it’s laced with poison, and when I don’t immediately make a move for it, he attempts to forcibly shove it over my head.

“I will peel your dick like a banana and then feed it to you,” I warn, backing away and allowing the shirt to fall into a mud puddle between us.

He snarls savagely, glaring at every male in the clearing, before he takes a deep breath and forces himself to relax.

I barely, just barely, hold in my snort.

Where all of the leaders of the werewolf territories come together to discuss territory disputes and issues that may have arisen with the humans. Oh, and to find the best ways to kill us bitten wolves for sport, despite the fact that they’re the ones who turned us in the goddamn first place.

“We’ll be there,” I answer immediately, ignoring the glare I can feel on my back from Papa. Sometimes, I’m content to allow him to take the reins and lead our pack. Other times, like today, I can’t control myself. My alpha dominance comes out to play, and trying to reel my wolf in is virtually impossible.

Something flickers in Sexy’s eyes, but I can’t read what it is. As quickly as it arrives, he shuts that shit down and lowers his gaze once more to the wolf behind me. The wolf I killed.

The wolf he saw me kill.

The treaty between our territories states that he’s allowed to sentence me to death for that. Or even kill me himself.

But I’ll be damned if I don’t fight tooth and nail until my very last breath.

Instead of saying anything, instead of attacking me or demanding my compliance, Sexy simply glares at me, eyes spewing acid, before whistling sharply beneath his breath. Immediately, the forest comes alive as all of his wolves begin to stalk back towards him. I count at least thirteen, if not more. We would’ve been fucking slaughtered if they’d chosen to attack.

Paiter—the man who whistled at me—gives Sexy a curious look, his eyes dropping to the body of the wolf I killed before he cups his mouth and releases an ear-piercing howl.

Sexy pauses near the edge of the forest, his tattooed hands clenching, but doesn’t bother to look over his shoulder.