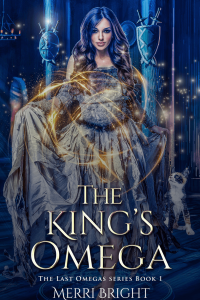 When you’re the last Omega in the world, forced to mate with a cruel, kitten-stealing king… well, it’s a good thing his four sexy generals know how to storm a girl’s castle.
But can they convince her to fall in love, without falling for her themselves?

Born long after the plagues that killed every Omega on the continent, Vali is the lost Omega prophesied to save her country.
All she must do is mate King Rigol… but he can’t stand her. He thinks Vali is a dirty, foul-smelling brothel maid, and falls for her treacherous mistress instead.
When the king realizes Vali is the true Omega, she still can’t love him, even if she doesn’t hate him quite as much. Sure, he gave her kitten back, but he’s already mated… to the enemy.
Can his irresistible generals convince her to fall in love—or at least in bed—with King Rigol? Perhaps, if they all torture her together.
Sweet, sexy torture.

“Are you frightened, kitten?” he asked, his icy voice stabbing like a spiked chain, leaving
pinpricks of terror across my flesh. My bare flesh.
I thrashed wildly against the ropes, my hips bumping against the hard wood below me.
“Let me go,” I pleaded, wishing I could muster a loud shout or a curse. Someone might hear and
come to help. But my voice came out as a whimper.
The man stepped closer, and I saw his sharp nose, straight brow, and deep brown eyes that
gleamed with intelligence and restrained violence. His skin was tawny, almost the same shade as
mine, and he wore black, matching the raven’s wing hair that swooped over one eye. His words
sliced at the shreds of my courage. “You are frightened, kitten. Don’t worry. I won’t harm you…
much.”
Kitten? Why would he… “Mischief!” I shouted, tugging at the ropes again. “Where is she,
my kitten? She was in my pocket…”
“You’re worried for your pet?” The man turned, a black cape swirling as he did, and lit
another candle on a table, where Mischief lay curled in a ball on top of a tea towel. She had
obviously been drinking cream out of a small saucer nearby.
“Who drinks tea in a torture dungeon?” I wondered aloud.
“This isn’t a torture dungeon,” the man said. His tone was no longer cold and cruel, but
slightly confused. Maybe I could confound him into letting me go. Madam always said I could
talk the flies off shit.
“So you say.” I nodded at the chains and devices I could see hanging from the wall beside
me. “I beg to differ. It may be my first dungeon, but I’m pretty sure this is what they have.
Spooky lighting, torture devices, a creepy man in a cape, dressed all in black and threatening the
captive…” I shrugged, about all the movement I could manage. “Torture dungeon.”

If I didn’t know better, I would have sworn a smile flickered across the shadow man’s face.
“I am Vilkurn. You are Novalia, known as Vali. And this is a dungeon, but not a torture
dungeon, as you say.” He leaned closer and let his next words sink in slowly. “I do have one of
those as well, if you’d like a change of location.”
“Um, no,” I squeaked, wondering what other kinds of dungeons there were. “This one is
very nice. Though I’m not sure what it says that you feel the need for two dungeons. That’s a bit
greedy.” Goddess, what am I saying? Am I berating a man who owns not one, but two dungeons?
Possibly he tortured so many captives in the first that he needed more space.
“I am greedy, kitten.” Vilkurn traced my nose with one finger, then my cheeks, then my
lips. “I’ve got you locked away, all to myself. By the stars, you’re stunning.” Up close, Vilkurn
was stunning as well. His dark eyes had glints of gold, amber sparks that caught and pinned me,
slowly drowning in the heat of his gaze.