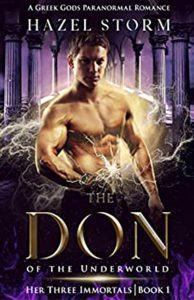 The Don of the Underworld just moved in across the street. And he says he can save my sick brother…if I sell him my soul.

His name is Grey and he has two sexy-as-sin brothers.

What I don’t know is that they’re immortal.

When I run into Grey’s brother Raef on the streets of New York City, I think I’ve found a gentleman.

Then I meet his brother Aroz in a dream. He’s the God of Lust, Grey tells me, while calling himself the God of Ecstasy. And I wonder if they’ll live up to their divine names.

But more importantly, I need to save my brother.

The price is high.

A life for a life.

Is it a sacrifice I’m willing to make?

The Don is a slow burn, hot and steamy, Why Choose? novel and the first story in the Her Three Immortals series.

Stopping near a parking meter, I gaze into the sky, trying to gauge whether the snow will stop soon or fall for hours. Snowflakes flutter into my face, cold prickles against my skin. They’re beautiful and pure, mesmerizing.

Something solid collides with my shoulder. My hands fly out, reaching for a handhold as my traction-less boots skid over the sidewalk. With a cry, I tumble backward.

An arm hooks mine. For a split second, I’m floating in midair, then with a rush, I’m pulled back to earth and land on my feet.

While my brain tries to figure out how I was saved, my eyes widen. “Grey?”

Grey hasn’t let go of my arm. He looks confused, then annoyed, and I realize he isn’t my new neighbor at all, despite the uncanny resemblance. He’s not as tall or bulky, and the highlights in his hair are more orange than red. But there’s something about him, a glow similar to Grey’s, though not as intense.

“You know Grey?” His grip tightens, making me gulp. The sharpness in his eyes fades from accusation to curiosity.

Feet squarely on the ground, I escape his hold but not his gaze. Icy flakes gather on the shoulders of his black wool coat, and the orange highlights in his dark hair radiate as if lit from within, the way Grey’s does.

“Did you say you know Grey?” he repeats.

My eyes remain prisoners to his as I nod. Heat rises in my face until it hits the icy surface of my skin. I exhale. “Yes.”

Snow sparkles in his hair. “Do you have a moment?” His expression softens, tone shifting to amiable.

I blink and glance around. People hurry past as we stand in a gap next to the parking meter. “A moment for what?” I don’t know this man. Sure he resembles Grey, but the rest could be a ploy.

“To chat.” He’s all pleasant smiles and charm now.

And I’m all suspicion. “About?”

He pulls at his coat, which sends the snow on his shoulders cascading to the ground. “His brother.”

“Yeah, right. I made a mistake and called you Grey. Do you seriously think I believe that?” I take a step away from him. “My guess is you plan to drag me into an alley and murder me.”

Creases deepen in his brow. “Obviously, you don’t know who I am.” He sounds surprised.

Is this guy for real? “Obviously, I don’t because I just mistook you for someone else.”

“You mistook me for my brother,” he corrects.

I offer a dramatic eye roll.

His frown slips into an amused smile. “I’m Raef Fox.” He holds out a hand sheathed in soft black leather.

Giving him a dubious look, I shake. “Vanessa Maan.”

He tips his head to one side. “Vanessa…as in butterfly?”

Pressing hands into pockets, I flare my coat to accentuate its monarch coloring.

A cheeky smile twists his lips. “I hope you’re not planning to fly anywhere in this weather.”

The snow piles on all horizontal surfaces, including ours. “Definitely worth waiting this one out.” I try to ignore the fact it might snow all night. Could I find an all-night coffee shop in this part of town?

“There’s a café up this way. A good place to plan your next move,” says Mr. Sly Fox.

I smirk. “Are we playing chess now?”

His eyes twinkle in the streetlights. “If you like.”

Raef Fox is nothing like his brother. Then it occurs to me I don’t know much about Grey. I don’t even know his last name. It must be the same as his brother’s…except, Grey Fox sounds like a joke. Maybe Raef could change his name to Red.

I fight another eye roll. “Why not?”