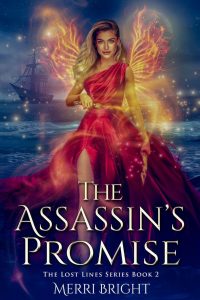 She was bred to be lovely. She turned out lethal.

After escaping an evil king bent on reviving an extinct, magical line, Roya promised to dedicate her life to ridding the world of abusive tyrants. But when her mentor, Thorn, flunks her out of the Assassins Guild, she flees her humiliation and runs straight into danger.

Now kings and warlords hunt her, somehow privy to her deepest secret—that she is one of the legendary line. Thorn is her only ally, until Roya’s magical lure inadvertently draws more than one dangerous protector to her side.

Roya wants to be known for her skills as a poisoner, not mysterious powers. But when Thorn teams up with a prince, a warrior-scholar, and a pirate, there may not be enough poison in the world to kill the pull she feels to all four, though these men may not be who they say they are. And some may want to lock her away for themselves.

Maybe it’s time for her to cook up a deadly plan of her own.

We had clear skies, strong winds, and enough good luck that no one was surprised when it took a turn for the worse. A storm brewing on the horizon moved in just before nightfall, forcing us into our cabins.

After two weeks of Thorn avoiding me like I was plague-ridden but spending hours every day with Kavin on deck, I expected him to ignore me, and he did. Kavin told me stories about his country, though, until I fell asleep.

Sometime in the night I woke, the ship pitching so hard I thought we must be capsizing. I had been dreaming of a faceless Alpha with golden wings, and the sheets beneath me were slick with my own sweat and smelled of sour oranges.

The bed I was on pitched high and I grabbed hold of the wooden rail on the side.

“Roya?” Thorn’s voice came from the hammock. “Do you need to move to the floor?”

I hadn’t even opened my mouth to answer when I heard Kavin’s voice from the far side of the room. “No, she’ll roll into the chest. The bed has sides.”

The bed might have sides, or at least a thin wooden slat that surrounded the mattress, but I was about to pitch over them. “Is there a strap? To hold me down?”

The lightning through the porthole illuminated Kavin as he rose from the floor and stood at the side of the bed.

“May I join you, Omega?” he asked, his voice strangely formal.  There was something I wasn’t getting.

“Why are you asking like that?” He didn’t answer, and the lightning exposed a strange vulnerability in his gaze for a split second.

“I told him you had made a nest two weeks ago,” Thorn said softly.

“A nest.” Kavin cleared his throat. “It’s not… It’s not one now. But I can’t. No Alpha with any honor would enter a place where… Well.”

“Oh, for the Goddess’s sake, get in,” I commanded, as I watched him pitch and sway above me. I pulled the covers open, and he joined me. Our bodies together were the perfect pieces to fit the wooden rectangle of the bunk. Like puzzle pieces finding their place at last.

I let out a grunt as I felt one of Kavin’s puzzle pieces growing slightly longer against my stomach.

“Sorry,” he murmured. “I can’t help it.” His erection rubbed slightly above my core, and it felt good. Too good. My stomach clenched, and the place that had been aching the days before began to tighten again, as if preparing to launch… something.

To my great mortification, I whimpered. Kavin sniffed audibly, and I knew why. The cabin smelled like ozone and seawater, orange blossoms, apples, and green growing things.

It was my turn to apologize. “Sorry, I can’t help it either.”

“I don’t want you to,” Kavin rumbled. “It’s more than I ever dreamed—”

Thorn groaned. “Will the two of you go to sleep? No one needs to stand watch tonight with this storm.”

“Is the storm dangerous?”

“Not as dangerous as you, little queen,” Thorn said with a low snarl. I heard him rustling in the hammock, and then the creaking of the ship and the battering of the wind and waves covered every sound.

“What about your things?” I whispered in Kavin’s ear. “The lamp, the books?”

“I put the breakables in my chest.” His breath on my hair sent a sharp jolt of pleasure through me. “Locked away, they’ll be fine.”

We both waited a moment, breathing together, feeling one another. His erection continued to lengthen, and finally I couldn’t help myself. The coiling in my belly was almost painful, and the sensation of slick moisture seeping from my folds made it impossible to keep my thighs from rubbing together. The air was thick with my scent.

If Thorn hadn’t been snoring already, I wouldn’t have dared what I did next. I knew it was wrong to take advantage of Kavin, when Thorn was the one I had always wanted, but… “I can’t get comfortable. Is it fine if I move?”

“Please,” he whispered back.

I gathered my wicked courage. Thorn was just across the room, and even if he was sleeping now, he could wake up at any moment.

But he had rejected me. And Kavin was strong, handsome, intelligent, and there, and the darkness made me bold in ways I had never been before.

I pushed my skirt away from my legs and let the heat between my thighs meet his leg. He still wore his trousers, of course, but I could feel the flexing of the muscle beneath as he realized what I had done. My thin underclothes were already damp through, but I didn’t care. I needed this.

The room swayed, and I did, too, rubbing my heat over the top of his leg, letting the friction and the pressure there begin to build to something tantalizing, and just out of reach.

I’d touched myself before, under the covers, back at the Guild. Thinking about Thorn, wishing it were his hand instead of mine, I’d felt something pleasurable, but it always faded. I could never reach whatever goal my body promised lay within reach. I’d never felt even the slightest hint of this desire for any other man besides Thorn.

But now, with Kavin’s heated breath in my hair, and my folds rubbing back and forth on his leg, the wetness there making the cloth slick enough that I could glide… Oh, Goddess. I wanted him more than my next breath, and I’d left evidence of that all over the fabric of his trousers.

“I’m sorry,” I whispered, trying to pull away. But I couldn’t. His hands were on my shoulders, his other leg moving around my hip to trap me there.

“I… I made your trousers wet.”

“Yes.” He growled the word into my ear at the very moment he ground his thigh into my mound. “Do not stop, kralovna. I want to be soaked with you. I want to feel your slick cover my skin. Keep. Going.” His voice was a demand, almost a barked order, and I found myself obeying.

I pressed myself to him, and one of his hands moved down, lifting my skirt, and finding the nub of flesh that rested at the top of my folds. “This, Omega, is what I want. I want to pluck you, to lick and bite you here. I want this in my mouth, under my lips, and your legs wrapped so hard around my head that I can’t breathe as I plunge into you with my tongue.”

He had switched into his native language as he moved his fingers over my clit, pinching and rubbing and circling. His hands were drenched with the wetness I produced, and the sensations he brought forth were pure pleasure, with just enough roughness to keep my mind on the magic he was working between my thighs.

The coiling in my center grew almost painfully tight as he moved, and now the storm outside was nowhere near as wild as the storm he was creating inside me.

“Kavin!” I rasped out his name as something began to build, a terrifying sensation, like falling, like flying. I was afraid for it go on; I was petrified that it would stop.

“Yes, kralovna, that’s it. Let go, come on my hand, spill your juices on me, let me lick them, let me plunder your sweetness with my fingers. Open for me, kralovna…”

Suddenly, he pinched my clit tighter, and worked another finger below to tease at my lips, at the place that I knew was closed. Unlike Beta women, my Omega nature kept my womb sealed until I accepted a mate; I had learned that much. I’d thought I might someday open down there for Thorn, but no one else.

But now, with those fingers moving so close to it, I felt something loosen, and a gush of fluid spilled out onto Kavin’s hand. Was I opening?

He groaned as the air around us grew as thick as honey. “Come, sweetness,” he implored. “Come on my hands.”

The lightning at that moment lit up the room with a burst of fire, then five bolts, keeping the room illuminated. I glanced to see if Thorn was awake, and saw him standing against the wall, as far away as he could get.

I froze, trembling, unable to keep moving. Then his voice rasped out, shocking me. “Come, little queen,” Thorn demanded. “Come for us both.”