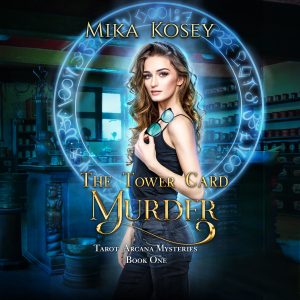 One draw of a card changes my life—because it’s not just any card.

I read tarot cards. I’m the real deal, but my psychic abilities scare the shit out of me. I see the auras of the living. Sometimes the dead speak to me—and not always when I want them to. Just reading cards? Now, that’s safe.

Except this morning, the cards said my life will change—and there’s no going back.

Not super helpful. Why can’t they tell me the truth about my father’s unsolved murder, or that creeper I locked eyes with on the way to work this morning? Better yet, why not explain my vivid dreams involving five enthralling men?

Maybe it’s the total stranger who walks out of those dreams, into my life and opens the door to a reality neither of us could have predicted. The reality that this is my last chance to reconnect with my five soulmates from a previous lifetime, 7000 years ago.

I must find and re-awaken them. But in the process of finding one soulmate, I might’ve lost another one forever.

Will I uncover the truth about my father while finding my soulmates, before a serial killer finds me?

Yeah, I have so many questions, but I’ve learned to be careful what I ask. Because the cards never lie…but they don’t always tell the truth.

The Tower Card Murder is a Reverse-Harem Paranormal Romance featuring multiple love interests, a slow burn focusing on emotional connections with a steamy fade to black, and the reincarnation of the oldest recorded reverse harem story in human history. Oh yeah, and lots of tarot cards. This is the first book in the Tarot Arcana Mysteries series.