Tethered to the World 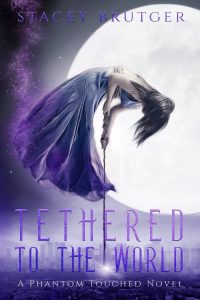 ONE TOUCH CAN SAVE YOU FROM CERTAIN DEATH…OR SENTENCE YOU TO AN ETERNITY IN HELL.

Born with the ability to defy death, Annora has been warned to keep her gift secret, but her greedy uncle can’t resist exploiting her by any means necessary. Starvation, beatings, broken bones—she’s survived them all and emerged stronger. But it’s not enough for him. It will never be enough. When she discovers her uncle plans to sell her to the highest bidder, she risks everything to escape the prison that has become her life.

The last thing she expected was to land at a university for supernaturals…or be paired with a pack of men as broken as her. As students go missing, Annora can’t get over the suspicion that she’s being hunted. To protect her, the guys must set aside their personal troubles and begin working as a team. But as her past collides with her present, she must make the ultimate sacrifice and expose her secrets to save the guys who’ve become more than family to her…and hope she’s strong enough to live with the consequences.

The giant of the man whirled and grabbed her wrist. Her fingers clenched where they were buried in the almost coarse pink strands of his hair, touching what felt like—​

A rumble emerged from the man, drawing the attention of the guy with a shock of bright red hair next to him. When the redhead turned to look, his eyes widened almost comically, then he swore.​

“Hey, Mason. How about we let the pretty girl go, big guy?” The man was a foot shorter than the giant, his bright blue eyes seemed to snap with electricity, his lean frame practically vibrated with tension.​

The giant’s hands flexed possessively instead of letting go, not even bothering to turn to the smaller man. “Piss off.”​

The redhead sighed with relief, then turned those stormy eyes toward her, a smirk brightening his face. “Do you know horns are an erogenous zone?”​

“What?” Annora jerked her hands away, her face burning.​

The giant scowled and tightened his hold on her for a second, as if reluctant to release her—or just pissed at the interruption.​

With a roar, the giant let her go and turned on his tormentor. He seemed to bulk up, gaining another foot in height. His teeth lengthened, his features became more exaggerated, his forehead larger, his horns actually growing. “Logan—I’m going to kill you very slowly, and enjoy it.”​

The redhead lifted his hands in surrender, dancing out of the way while the giant stomped after him