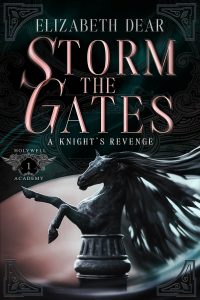 In Saint Gabriel City, there are the Four Families, and there are those who are owned by them.

The Spencers, the Hargraves, the Ferreros, and the Knights rule the City together with their exorbitant wealth and iron fists that no one dare challenge.

Each Family has an Heir, and they are raised together to one day assume control of their respective empires, trained to crush anyone who stands in their way under the heel of their unmeasurable power.

At least, there were Four Families, and there were four Heirs—until three of the Families banded together to murder the Knights in cold blood one fateful summer night.

Their daughter was only eleven years old.

And the other Heirs—three sons—were only twelve as they watched their best friend die on the floor of a soulless beige conference room next to her parents.

Seven years later, the remaining Heirs have taken their place at the ultra-exclusive Holywell Academy where the City’s elite strive to earn a coveted place in the Families’ kingdom by rubbing elbows with the exalted sons.

Only what Bennett Spencer, Noah Hargraves, and Zach Ferrero don’t know—what the Families have failed to realize after all these years—is that Jolie Knight didn’t die that night.

That little girl has been hiding just across the river, right under their noses.

That little girl is all grown up, and now she’s the Academy’s newest scholarship student.

That little girl is me, and I’m going to burn this City to the motherf*cking ground.