Stolen by Her Wolves 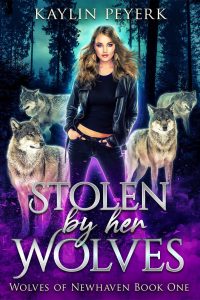 As one of the final surviving members of a brutal shifter clan, I’ve been chained and imprisoned for my entire life by my human uncle for the sole purpose of keeping other humans safe from me.

At least that’s his excuse.

Solitude and pain are all I’ve known, so when four men show up claiming to be my saviors I’m not exactly receptive to the idea. Sure, I’m grateful that they’ve busted me out of my own personal brand of hell, but that’s about as far as the gratitude goes. Now I have no money, no pack, and nowhere to go unless I take them up on their offer to transport me safely to Newhaven, a sanctuary for omega wolves deep in the woodlands of Alaska. With no other choice left, I take it while vowing to keep my distance for the week-long trip. But as time passes my guard falls, leaving me conflicted and suddenly vulnerable to the charismatically handsome group of men.

Will I make it to Wolfhaven without falling for them, and do I really want to?

Most people can pinpoint a reason they’ve spent nearly their entire life chained and regularly beaten in the back of a dark cold jail cell.

Perhaps they’re criminals. They hurt someone, stole from them, killed them.

All it took for me was to be related to them.

I’ve been here for as long as I can remember. Only being taken out of my cage for things far worse than the raw chafing of the manacles encircling my wrists. Not that I complain or scream or cry any longer. No, that just fuels my captor’s aggression, his compulsion to hurt me. So I’ve learned to become silent. To fade into the wall and pretend that my limbs are, in fact, not broken.

It’s easier that way, I promise.

The familiar sound of a heavy metal door clanging open jars my ears, and I flinch. Is it morning already? My femur has barely healed, let alone the broken ribs that have made breathing a chore for the last seven hours. If he plans to come back for more today, I’ll be a bleeding pulp of nothingness all weekend long while he’s gone. I wouldn’t be able to enjoy the silence then, wouldn’t be able to do anything other than count the seconds in sets of ten just to distract my mind from the pain of healing. Because I do heal. . . I heal much faster than any normal human would.

It’s one reason he does this to me. He’s always assured me it’s for the good of humanity, for research. A way to document just how far he can push a supernatural wolf repeatedly just for my body to knit itself back together. At one time it was fair and without pain. A blood draw once per week, excellent food, and even as many books as I wanted to read. No chains, no dank cell that smells like my waste and blood.

I had a room. It was simple and sparse, but it was mine. From age six to thirteen, he kept me in there. Claiming to love me, to cherish me. By my first bleeding I wasn’t afraid anymore, I was comfortable with him. Like he was my actual father and the murder of my family followed by the kidnapping was nothing but a fuzzy memory. But with my first bleeding came the first change into my monster. It began with a devastating, horrid pain that began at the base of my spine and worked its way outward. My bones broke and morphed into my wolf, something he’s never allowed me to really look at. All I know is that I’m on all fours by the end of it and covered in coarse white fur. And I feel feral in that form, carnal, savage.

I never blamed him for throwing me in here after that first change. At least not until recently. Not until the beatings became so frequent and never ending that I’ve broken my one and only rule to keep silent just to beg him to stop. He never does. Now I hate the man that I once was so infatuated with. Escaping was never an option with how tightly he has me locked down at all times, all I can do is watch him with a fire in my eyes each time he rounds the corner of my cell. Keep silent and imagine what it would be like to kill him, to punish him for all he’s done.

But here in the dark alone?

I have no such rage. My limbs become limp, my body hanging from the chains on the wall like I’m already dead. A deep aching part of me knows that if I don’t get out of here sometime soon, this man will break me. Twenty years of captivity and no way of escaping it has taken its toll. I will be nothing but a shell of a woman and it won’t matter what kind of wolven beast is inside me. It won’t matter how much I fear the darkness within; that hiding presence I can feel in the back of my mind like a second skin. If she can save me, even end me. . .