Spells of Iron and Bone 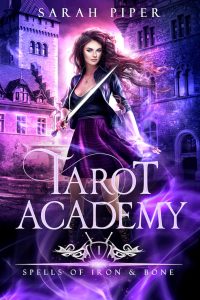 Magick is real. It’s also highly illegal—not that I’m worried about that.

Sure, I heal faster than most, and I’ve got a sixth sense for brewing tea that can fix just about any problem, but my café isn’t exactly a hotbed of paranormal activity.

At least it wasn’t… until some psycho attacked me and woke up the freaky, forbidden magick inside, earning me a one-way ticket to jail.

Now, a covert magickal university is offering me a deal: my freedom in exchange for help with the Tarot prophecies—cryptic predictions they believe hold the key to stopping a deadly apocalyptic plot.

Predictions only I can decipher.

Because the witch who divined them? She died years ago.

I should know. She was my mother.

All I have to do now is master my crazy powers, decode the doomsday prophecies, outwit a mean-girl coven that puts the psycho in psychic, and survive the temptations of one very naughty professor and three scorching-hot, overprotective mages shadowing my every move.

There’s only one problem.

If I’m right about the prophecies?

Survival isn’t in the cards for any of us.