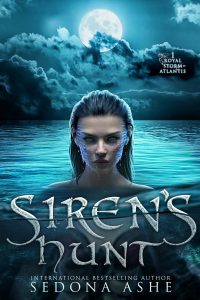 After centuries spent in suspended animation, I’m hangry. Now, a team of sexy men have been sent to hunt me down…

Thanks to a protective spell gone wrong, I am what the world calls a ‘siren’.

Yep, you heard me right. I’m a siren. The lost princess of Atlantis. During the horrific battle between light and darkness, as Atlantis sank beneath the waves, I was caught in some crazy magic that changed my body and put me down for a really long nap. The humans, still greedy as ever, woke me up when they stumbled on an energy source near the heart of my home.

I battled alongside my Atlantean brothers and sisters as evil spread like a plague from city to city. We fought bravely, but in the end, I lost everything.

I have nothing left to lose.

That same darkness has continued to take over the world while I slept. My mission is to cleanse the world of evil, so I need to get busy.

It is easy to find the men with blackened hearts and drag them to their watery graves beneath the sea. But it isn’t long before the disappearances are noticed, and I go from hunter to hunted.

Cleansing the world of evil takes a lot out of a siren. So, when the three good-hearted men cross my path, I’m ready to make them bad. I just need to figure out how things work with my new anatomy…

This paranormal fantasy romance features a slightly darker siren who collects her mates throughout the series. This is not the usual bubbly mermaid tale! It is full of spice, humor, and a slightly feral siren…. Oh! Let’s not forget the totally ripped guys you will want to sink your fangs into! It will have a HEA… eventually.

“There’s something fishy going on,” the man named Kye had whispered.

I had laughed before quickly clamping a hand over my mouth. I hadn’t laughed since I awoke, and even in my previous life I remembered laughing only on rare occasions. I didn’t get time to dwell on this latest development. A crack, followed by a heavy splash, yanked my focus to the disturbed water at the back of the boat. Ducking my head beneath the water I searched for the human, expecting to see him kicking back to the surface with a smile on his face.

Instead, I saw Kye’s limp body sinking like stone toward the seabed, twenty feet below the vessel. The coppery taste of his blood sent my body and mind into a tailspin. Sharks weren’t the only creature of the deep who could taste blood in the water. I wanted to save him from drowning, but I also wanted to sink my fangs into his neck and taste him. My new nature required blood to survive, but I hadn’t craved blood in the way that I wanted Kye’s.

All thoughts of staying hidden fled from my mind. I wanted him safe, and I wanted to taste him. I shot like a torpedo through the water, not bothering to hide the sounds of my fluke as I used it to propel myself faster than I had ever moved before.

Sand and silt puffed around him like a cloud when he landed with a soft thump on the seafloor. He remained motionless, a thin line of crimson blood drifting up from his head. His team shouted out orders, I could hear them scrambling for the back of the boat. They were going to jump in as well. I had nearly reached him when a silver glimmer caught my attention. The panic inside me tripled and I forgot to breathe. I wasn’t the only predator in these waters tonight, and the large female shark that I had grown fond of had smelled the blood as well.