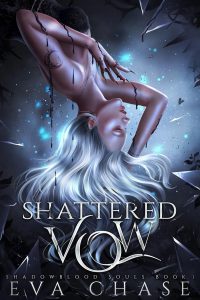 We vowed to escape together. I broke that promise. Now the men I loved just might break me.

There were six of us. Caged, turned into monsters, and tormented with brutal tests of our horrific emerging abilities.

We had only each other to count on… until our escape attempt ended with one dead, the others recaptured, and me dragged away into a different nightmare.

Now I’ve finally fought my way back to rescue them. Except the men I set free are hardened, beastly versions of the devoted boys I remember.

They see me as a traitor and a murderer—but they refuse to let me go now that they have me back.

They have no idea that the greatest threat may be the new darkness that’s woken up inside me.

I don’t know how to control it. And if these men break me, I could destroy us all.

*Shattered Vows is the first in a new urban fantasy series for those who love savagely possessive men and fierce heroines who’ll fight for what’s theirs.*

The moment we’re inside our makeshift tent, I turn to face the guys. My gaze locks with Jacob’s.

His handsome face hardens, a cold glint forming in his eyes. Without any warning, he throws himself at me.

The movement is so sudden and unexpected from a long-lost friend that my reflexes scatter and my muscles don’t do much more than twitch before he’s slamming me to the ground. My arms shoot up instinctively then, but his hand is already clamped around my throat and pressing in hard, cutting off my airway with a shock of pain.

Jacob glares down at me, his gaze pure ice now—icy hatred. Frigid enough that I shiver even as I squirm to shove him off.

Under normal circumstances, I could outpower him easily, But I’m tired from a night on the run, and he’s got to weigh nearly twice as much as I do.

My wrists and ankles jar against the invisible hold of his telekinetic power. My thoughts are still too scrambled for me to come up with a coherent strategy to get him off me.

What the hell is going on? Why would Jake want to hurt me?

“Jake!” Andreas snaps, his tone sharp enough that Jacob’s head jerks around, it’s so unusual from the normally easy-going guy. “Get off her. We need her. She’ll know things.”

What is he talking about? I squirm more urgently against Jacob’s hold, an ache digging into my lungs and my vision starting to waver.

But even with the choke hold he’s got on me, the press of his muscle-hardened body against mine stirs a trace of old longings laced with horror.

“Drey is right.” I recognize that quiet, even voice as Dominic’s, though he’s out of view.

Jacob swears, spittle hitting my cheeks. Then he shoves away from me as quickly as he sprang at me, as if he can’t stand to be touching me for a second longer.