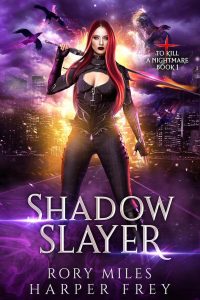 The best way to ruin a rogue slayer’s day? Force an arranged marriage on her.

Despite being the best of the best, my parents–who run our region’s slayer council–decide it’s time for me to get married. Apparently, being the wife of a high-born slayer will finally make me respectable. Or so they say. I see the arrangement for what it really is: a power grab.

Now I’m stuck with an infuriating man who’s no happier about this arrangement than I am, though he insists we go through with it. Trying to get rid of him while eradicating these new nightmarish demons won’t be easy. Throw in a sweet shifter who claims I’m his fated mate and a handsome fae stalker, and I might just lose it.

I always wished for a new family, but this isn’t exactly what I had in mind.

How am I supposed to juggle three men and save the world? I guess we’ll find out…

Shadow Slayer is the first in a trilogy. This is a why-choose romance with laugh out loud moments, spice, and general chaos.

“Tacos and More, can I take your order?”

My stomach lurches, and it’s not from the alcohol. “I’m on the way up the elevator right now.” I hop out of bed and grab a random shirt from my clothes pile near the closet floor.

“If you’re not here within the next twenty minutes, you’re suspended. This is the fifth time this year. What sort of councilors would we be if we—”

I make a static noise into the speaker, shimmying into my pants. “Sorry. Shit–service –elevator. I’ll be right in.” I end the call and throw my phone at the bed, grabbing a brush and yanking it through my hair with enough force to rip some strands out.

What sort of councilors would we be… ugh. Always about the job and not about family life. She didn’t even ask if I was okay. I mean, I am, but what if I’d been dead? What if I was in the hospital when she called? I shake my head. She’d still yell at me for missing a meeting.

“Whatever,” I mutter, hating how moody I already am at nine-thirty in the morning. Granted, I am officially late for the weekly check in at the council office. Why we can’t do zoom calls like all the modern businesses of the world is beyond me. I could be attending this meeting without pants. Besides, we’re fucking supernaturals. You’d think technology would be our best friend, but no, they insist on having these meetings in person like we’re still in medieval times.

Face-to-face interaction is key to growing the team bond.

Slayer propaganda to the max. They preach the team environment like it’ll be the thing that saves the world, not us actually doing our jobs and killing the baddies. I’ve taken down plenty of demons on my own.

I don’t have time for makeup or to fix my lopsided bun because I’m late. Good thing I only live a few blocks away from the swanky Portland Council office. My apartment building may or may not have been strategically selected in the downtown area for incidents such as this. I’m not saying I’m late all the time, but I’m not not saying that.

I shove my wallet into the pockets of my ripped jeans—an attire choice that’ll piss Theo and Bianca off—and snatch my keys from the counter. I leave my phone behind in case she calls again. I don’t need her huffing and berating me for constantly disappointing her. My kill count is phenomenal, but I still get glaring red marks for being tardy and because she doesn’t approve of my clothes.

Pulling the door closed, I make quick work of jogging down the stairs and burst out of my apartment building. The old lady walking her dog startles and screeches at me. I shout my apology as I take off in a sprint. I can’t use my enhanced speed without turning heads, but I run as fast as humanly possible. I don’t want to get suspended. Contrary to popular belief, I take my job of defending the world very seriously and I’m not going to lose it.

That’s all I have.

Bianca is going to blow a fuse. My dad probably won’t even look at me long enough to notice, though, so at least there’s that.

I reach the fifth floor and breeze out of the door, shooting finger guns at a flabbergasted Doris, the front desk attendant. She squeaks and hops up from her chair.

“I know the way, Doris,” I call over my shoulder. Fuck. The glass walls lining the conference room show me everyone is already here.

“Greer!” she shouts again, but I ignore her and plow into the meeting room like I’m the main character and this is my book.