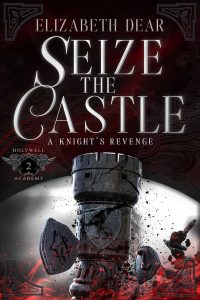 The Four Families have ruled the City for generations, but they made a huge fucking mistake when they murdered my parents and didn’t manage to kill me too.

I’ve revealed my true identity, taking the City and Holywell Academy by storm, but the heads of Spencer, Hargraves, and Ferrero continue to underestimate me. They think I’m an annoying little gnat trying to play at being an Heir, and that will make it all the sweeter when I take everything from them.

But their sons—the boys who were my best friends for eleven years—they have different ideas about me than their parents do.

Noah longs for our friendship but feels hurt by my lies.

And Bennett—he’ll resist my attack on his legacy until the bitter end, but he’d still rather die than lose me again.

And me? I’m starting to think I need my boys back with me after all.

But they’ll have to choose—it’s me or the Families.

Because I came to burn it all down, and nothing is going to stand in my way.

This is a New Adult, college-aged dark academy romance. It is the second book in a trilogy and does end on a cliffhanger. It is also a “why choose” romance, which means our heroine will have multiple love interests, and she will not have to choose between them in getting to her happy ending. As always, this series is for readers age 18+ and contains a ton of foul language, very steamy scenes, and violent themes. If you’ve read Storm the Gates (A Knight’s Revenge Book 1) and want to see how Jolie’s story continues, dive in!