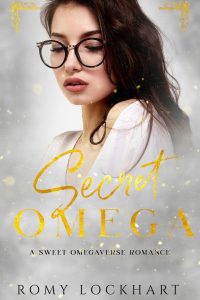 Secret Leto is going stir-crazy in the small town she grew up in. Full of Betas, Silver Lake is the safest place for an Omega in hiding, but she can’t stand to spend another second trapped there.

Passing for a Beta at Goldcrest College is so much harder than she expects. The big city is full of Alphas, and she’s starting to attract some attention that could ruin her shot at freedom.

Meeting a rare male Omega and his Alphas, her perfume is triggered, and there’s no going back. She can run from herself, but she can’t hide from her true mates.

Secret Omega is a standalone sweet omegaverse romance with college-aged characters, serious steam, and an HEA. Please note this is the second edition of this book. It has been revised, extended and re-edited.

Four more fucking years. That’s how long Cassidy expects us to hang around this fucking campus, how long he expects us to hide what Dylan is, and pretend we aren’t knotting him nightly and marking him in places no one else gets to see.

All because Dylan wants to go to school like everyone else.

When we found him, I thought our luck was changing.

An Omega just coming into his perfume, choosing us as his Alphas.

What were the chances? Slim to none, considering the odds of finding an Omega out in the big wide world. Most of them get picked up by the Omega Academy, placed in one of their glorified prisons until they’re deemed ‘ready’ for a pack. Fuck knows what goes on in those places. Any that don’t get picked up by the academy … well, I don’t fancy their chances of survival at all.

I don’t like this plan Cass came up with to let Dylan come to college. We aren’t the only Alphas around campus. If any of the others make Dylan for what he is, there will be carnage.

I fucking guarantee it.

One sniff of that crazy sweet, utterly intoxicating treacle-toffee perfume of his and every Alpha at this college would be ready to fight to claim him. There’s nothing quite like knotting an Omega. Regular sex doesn’t even come close.

Not that I would let any of those assholes get their hands on him.

I’ll break every bone in their bodies if they fucking dare to breathe in his direction.

Hell, I might do it pre-emptively. Pick fights one by one. Put all of them out of commission.

Make sure they can’t get near my Omega.

Cass claimed him first. He didn’t hesitate for a second when he realized Dylan was ours.

I’m ashamed to admit, I did. Shock, I guess. I’d never looked at a guy before in that kind of way.

It felt impossible, until I caved to the mating bond and claimed him. The minute he was crushed against me, I knew it was right. He was made to be ours.

So, I stalk the campus, knowing if I come across another Alpha, I won’t be able to help myself.

Threats are made to be eliminated, and I’m in the mood to do some fucked up shit if the right person crosses my path. I pace around all damn night, keeping to the shadows. The restlessness I’m feeling will pass. Homicidal rage boils up inside me just thinking about the looks I fucking know Dylan’s going to get from everyone he meets. He’s going to be eye-fucked to death by the end of the first day, and there’s fucking nothing I can do about it.

It doesn’t matter that Dylan’s going to be taking suppressants to mask his perfume and mute his emotional responses. He can play-act as a Beta, but any real Alpha will spot the difference the moment they lock eyes with him.

I can only hope the influx of new students keeps any predatory bastards busy for a long, damn time.

Every new semester is the same. New blood, new Betas swooning over the Alphas. I fucking hate it. I hated it before Dylan came along, and I hate it even more now. I get propositioned left, right and center until people realize I’m more likely to tear out their throats than pin them down on a bed.

I promised Dylan and Cass I’d burn this rage off and come back before daylight.

I don’t think I can keep that promise.

Then, it happens. My rage is muted suddenly, another sensation replacing it. A surge of hope rushes through me, released by the primal instincts of my Alpha. The sharp shift in mood is jarring. It disorients me, stops me in my tracks. I don’t fully understand the feeling, but I trust my instincts enough to know to lean into it.

I stop walking and study my surroundings. No one’s following me. It’s not that kind of instinct.

It’s something else. I just don’t know what.

I look out toward the path that leads to the residential halls, the dorms.

My gaze is drawn to a girl with long, dark hair and big glasses.

She’s what this feeling’s about.

She’s looking around, too … almost as if she feels it.

For a second, she looks directly at me.

She doesn’t see me. It’s too dark.

But it feels like a punch in the guts.

Curvy body packed into tight jeans and an ugly-ass sweater.

She walks past with her head down, and I want to step out of the shadows and taste her.

My dick is jumping around in my pants like he agrees with my instinct to chase her down and kiss this random girl’s pretty lips. As if he’s completely forgotten I’ve chosen my Omega, my mate for life.

I won’t give Dylan a boner some random Beta girl just gave me.

This is so fucked. What the fuck is wrong with me?