Return to the Hollow 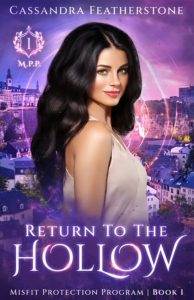 It is neither intelligent nor polite to tell a true Southern woman with a gun she can’t do something.

But after I was informed my career with the F.B.I. was dead in the water, I packed up what little pride i had left and returned to my hometown. The one I never thought I’d ever set foot in again. Whistler’s Hollow.

When I left the Hollow 14 years ago, I never intended to return. But now I’m living in my childhood home, surrounded by hot guys, mischievous animals, and enough mystery for me to put my considerable talents to good use.

Nothing is what it seems in this small Southern town, but I’m determined to unravel the tangled web of my past–before it destroys my future.

What the fuck is a liquor store doing with a bouncer at the door?

The beefy dude takes one glimpse of Seer, then me, and then the animals following me. Grunting, he arches his brow. “Not from around here, huh?”

I squint at him, trying to figure out why something about him is making my skin tight. “I just moved back. She’s an old friend from out of town. Are quizzes part of your job?”

Blinking at me for a moment, the guy pauses, then lets out a booming laugh that rattles the windows next to us. “JOLENE WHITLEY!”

“Oi! Not chopped soddin’ liver,” Seer grumbles, cocking out her hip. “Part of the Peanut entourage, that’s me.”

“I-I’m sorry. I don’t remember you,” I confess, giving the beaming bear of a man a sheepish smile.

“Well, OF COURSE NOT! I hadn’t grown into my skin yet!” He laughs again, turning to holler behind him. “BOONE! Jolene’s here!”

Turning bright red, I put my hands on my hips. “Teddy, I don’t know who this monster is, but I’m supposed to meet people inside. Can you get him to let me buy a vowel so I can go in?”

His perfect teeth shine as he grins, the fresh stubble on his chin enticing as hell. “Well, Tilly, I don’t know about that. You’ve been avoiding me. Can’t say as I’m inclined to do you a favor.”

Euryale saves the day by swooping past, beelining for the boys since they’re the only people it knows. I smirk, tilting my head. “Pretty soon you’ll be obsolete, Teddy. Is that…FAMILIAR?”