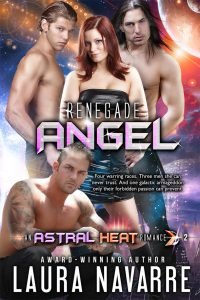 Four warring races. Three men she can never trust. And one galactic armageddon only their forbidden passion can prevent.

In the icy depths of space, a galactic mating contest is turning deadly, and the stakes are atomic armageddon. To unite four warring races, rebel princess-turned-cybergirl Kaia chooses the most dangerous possible mate in Zorin—a scourge-of-the-galaxy space pirate. Yet she’s seriously tempted by Dex, the imperial enforcer who’s Zorin’s ultimate nemesis…and his mouthwatering obsession. Kaia burns for both of them, but Dex and Zorin are lethal enemies. And the galaxy’s most powerful telepath, the mesmerizing lover who betrayed her and nearly destroyed her, is a major distraction for all three of them.

Can two mortal enemies defy a star-spanning empire that crucifies lovers for unconventional unions? Can a runaway princess dare to trust the enigmatic lover who abandoned her to scandal and disgrace? With the fate of billions now poised in the balance, can four fiercely distrustful allies survive a savage mating contest, navigate an interstellar war, and consummate the explosive passion between them…without dying in the flames?

Hard hands spanning her bare waist, Dex eased off long enough to get a good look at her garb. His gaze narrowed on the halter barely buckled over her breasts. His eyes kindled with gaslight flames. “What the devil are you wearing?”

“A gift from her future consort.” Zorin had slipped up right behind her—quick and quiet as a hunting wolf. “I figure we’re done keeping secrets. Kaia’s made her choice. Howdy, Dex.”

Dex’s head jerked up to meet his gaze. The air between them crackled with an arc of electricity.

Trapped between these two enemies and their solid heat, Dex standing between her thighs and gripping her waist, Zorin looming close enough behind to feel his breath in her hair, Kaia thought her skin would ignite.

Especially when Zorin’s big hands closed over his and pushed her into Dex’s arms. “It’s okay, kid. I know you missed her. I don’t mind.”

Dex pulled in a harsh breath and bent his head to claim another desperate kiss. Hunger tore through her and need pounded between her legs. Against her bare skin, Zorin’s fingers threaded through Dex’s. A degree of intimacy with his supreme rival Dex seemed willing—at least under these particular circumstances—to tolerate.

So aroused she could barely breathe, she rocked her hips into Dex’s straining fly.

“Kaia.” He pushed out a hoarse groan and licked into her open mouth. “You’re still…fertile. Aren’t you?”

“You bet your imperial boots she is,” Zorin murmured. “Till she conceives, she’s hotter than the core of a Mogadon reactor. She needs all three of us right now. On her side—and in her bed.”

Chest heaving, Dex lifted his head to look at him. Too hot to wait, Kaia leaned in to kiss his sun-bronzed throat and licked the salty sweat from his skin.

Zorin eased closer, starmetal armor pressing into her back. His voice rasped rough with passion. “I already told you I’m all in. How about you?”

Dex’s hand closed around her head to press her harder into his neck. Her frantic lips parted to suck a bruise onto his skin. He hissed under her mouth, hand clenching in her hair until her scalp tingled.

Which, in her current condition, only made her hotter.

“Let’s lay all our tokens on the table,” Dex grated in a voice like gravel, heart thundering under her hands. “She’s not the only one who needs something from me. Is she, Zorin?”

Zorin’s hands clenched on her waist. “You want me to come right out and say it? I’ll do ya one better. How’s this?”

Kaia lifted her head in time to see Zorin lean in to claim him with a brutal kiss. A purely masculine, purely dominant, purely I-know-what-I-want-and-I’m-taking-it kiss. She didn’t think she’d ever seen a hotter kiss.

A kiss to which Dex seemed far less stridently opposed than she expected.

Matter of fact, he hardly seemed opposed at all.

Glimpsing their twining tongues, hearing their throaty groans, feeling their urgent need telegraphed through their hands on her body, just about shot her core supercritical.

Dex surfaced gasping from that incendiary kiss. Zorin’s teeth scraped slowly over Dex’s lower lip—sucking it into his mouth in a power play that made her shiver—before Zorin released him.

By the time he did, they were both panting.

Dex licked his lips, candescent eyes glazed with passion. “Why don’t you tell me precisely how you fancy this wildly unconventional arrangement is supposed to work. You know the rules on Mogadon.”

“I’m Syndax. We do polyamory in the horde whenever. So I don’t have any rules.” Zorin shrugged against her back, blunt fingers finding the hem of her halter. “And you’re the head honcho, so you can make your own.”

“You make it all sound easy.” Dex snorted.

But he wasn’t pulling away.

And his eyes were locked on Zorin’s hands like tractor beams, watching him toy with the buckle between her breasts.

She swelled and tingled under Dex’s combustible gaze, nipples pressed hard against the leather. When Zorin eased the prong open, she breathed out a soft whimper of craving.

“You’re not a kid anymore, Dex. You said so yourself.” Deftly Zorin released the buckle, and Kaia shivered as her breasts sprang free beneath Dex’s transfixed gaze. “I’m not the one who’s afraid of this. And neither is she.”

And while Dex gripped her waist and looked his fill, Zorin leaned in to circle her wrists and pin them together behind her. The move arched her back and thrust her breasts forward.

The brazen exposure made her moan.

“Question is,” Zorin drawled, “are you and me gonna give our girl what she needs?”

“Damn if I’m going to say no to that,” Dex muttered, filling his hard hands with her breasts. His thumbs found the tight nubs of her nipples. Heat streaked through her, zinging straight to the wet ache between her legs.

“Is this what you want, darling?” His eyes smoldered as they took in her flushed skin and heavy lids and breathless mouth. But his voice was tender. “Both of us together? With you? Right now?”

She was panting so hard she could barely speak.

“Yes—please—I need—both of you inside me.”

Triumph flashed in Dex’s eyes like a supernova. Zorin growled and leaned in to kiss him again. Their mating scents rose deep and dark—spice and steel, passion and predator. Zorin pinned her hands while Dex played with her nipples, tweaking and rolling and pinching. Twin jolts of pleasure zipped down her thighs and lifted her hips in a wanton plea for more.

“You see how much she wants you?” Zorin said, guttural with passion. “How hard she’s gonna get off, having me hold her down while you’re bucking inside her? Then, once you shoot your load deep inside her and get her all slick and soaked and ready for me, I’m gonna take my sweet time and ride her long and hard, just the way she likes it. While you watch till you’re ready for round two.”

Maybe with me this time if I’m lucky, kid.