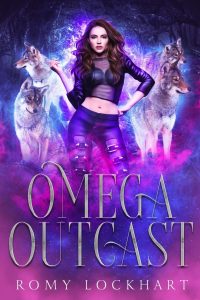 How do you stop running when you can’t remember why you started?

My name is Sloane Hanley, and I’m just a girl who needs to keep moving. Bad things happen when I stop. I come out of blackouts covered in blood. No memory of what happened.

Then, I’m saved from an attack, sent through a portal to a hidden town, and the blackouts stop. I discover I’m a shifter, a wolf. A rare one, too. An Omega.

I have true mates, Alphas, and they want to help me. I just need to stay in one place long enough to let them.

It’s always nightfall when I come out of a blackout, and I’m always somewhere I don’t recognize. Walking, as if I’m headed to a specific location. I don’t stop when I snap back to consciousness. I keep going. It doesn’t matter where I am. It only matters that I keep moving.

They can’t find me if I don’t stay in one place.

The street I’m on tonight is poorly lit. Streetlights are inconsistent. Some of them have been smashed. Some have just gone out. I move toward a triangle of light in the distance.

My body aches. I have fresh bruises. I can feel them now. My muscles are aching, my feet desperate for rest. My clothes feel dirty, and a little wet. Not rain. My hair is dry.

I concentrate on every sensation fleetingly as they all build up to the same picture I find myself looking at after every blackout. I’ve been hurt, I’m covered in dirt and gore, and I’m alone. I’m always alone.

It’s the one constant in all of this.

Life has never been easy, but this past year has been a fresh hell of unknown experience. I have no one to talk to. Sometimes that makes it easier to bear. If I said any of this out loud, it would feel less hazy. But, sometimes, it only makes me wonder when this torturous nothing of a life will finally be over. The latter covers it tonight. I stop short of making it into the light. I don’t know why I’m running anymore. Nothing matters.

Kim is dead. I can’t bring her back. I don’t even know who killed her.

I only know the one friend I had in this world is gone.

My vision blurs, my eyes filling with unshed tears.

It’s time. I’m long overdue to end things. Apparently, the universe feels my pain, because I’m suddenly aware of a low growl from the darkness behind me. A feral dog, maybe. It sounds mean. I can only hope it aims to kill, not maim.

I’m done. I can’t take another second of this torture.

I turn slowly, hoping to see what I’m dealing with. I remove the record bag that holds all of my earthly possessions from my shoulder, placing it on the ground. The growling gets louder. Red eyes fix on to me. Whatever the creature is, it’s bigger than any dog I’ve ever seen.

I crouch down, aiming to entice it closer. Whatever it is, it sounds vicious.

There’s a cacophony of sound from behind me—footsteps running, quickened breathing, and something less recognizable—and the growling gets louder.

Something zips through the air close-by, and the creature whimpers. I hear it crash into the row of metal trash cans I just walked past. Then, there’s someone at my side.

“Hey, are you okay?” he asks. His voice is laced with concern, but there’s excitement behind it.

I look up, trying not to judge too quickly. The guy is older than me, for sure. Mid-twenties, maybe. He has clear, light blue eyes that seem to have that sad puppy-dog look down cold. A light shadowing of stubble, and military short hair that I’m going to guess is a dark shade of blond rather than a lighter shade of brown. He’s a little taller than me. Wearing a black leather biker jacket and torn jeans. He’s carrying a crossbow in one hand, but he doesn’t seem to have arrows on him.

“I’m fine,” I tell him, wishing I could sound more like I meant it. Truth is I’ve never been much of an actress. Kim was good at putting on a face. I never could. He holds out his free hand, and I start to sense just a hint of desperation alongside the excitement he’s still exuding. Serial killer alert.

“We need to get out of the street,” he tells me, as I just look at his hand. “Where there’s one hellhound, there’s usually a pack not far behind.”

How disconnected from reality is this guy?

The weirdness of this whole situation is waking me up from my dazed stupor, bringing back the survival instinct I thought I’d finally lost. I don’t actually want to die. Sometimes, I just think it would hurt less than living.

Now that I’m thinking straight, I know I should run. Now. Before he can get any ideas about hanging me up in a freezer somewhere.

If only I could bring myself to care a little more. Serial killer or not, he’s stunningly attractive. I can’t tear my gaze away from him. It’s no use.

I take his hand. It’s a little rough. The hand of someone who works hard for a living. Only time will tell if that work involves chopping teenage girls to bits.

I bite my lower lip as I try to decide if it’s really worth the risk to go with him. I instinctively want to, but that’s only because he’s so damned attractive. He’s got this big, strong, badass physical vibe. If he was simply stripping me naked with his eyes, I’d have no reason to worry.

Those sad baby blues are the first red flag. Disarming, for sure. But they’re a sign that he doesn’t have everything he needs, and that’s definitely one reason to steer clear. He’s too hot to be single if he doesn’t want to be. Whatever he needs must be pretty twisted.

His chaotic emotional state only backs up that assessment. Add a fucking crossbow to the mix, and you have a stone-cold psychopath who knows exactly how to manipulate vulnerable women.

I don’t know why I’m not running already. I’m used to operating on instinct, and everything I have should be ordering me to get the hell away from him. So, why can’t I just run?

“Where would we go?” I ask, picking up my bag and slinging it back over my shoulder. I haven’t decided I’m going with him to his chamber of horrors, but I’ll hear him out.

The truth is he’s too damn interesting to ignore. If he tries anything, I can run. Or fight. I’m fast, and I’m scrappy when I need to be. It’s not as if he has any arrows left for his crossbow.

“I have a place nearby. You’ll be safe there.” His emotions are fighting each other pretty violently now, while he waits for my agreement.

I can read him like a book. He doesn’t know what he’ll do if I don’t agree to come with him. He wants me to go. So damn badly. For what reason, exactly, I can’t be sure. Considering I was pretty much ready to be gone from the face of this earth all of five minutes ago, I decide to sate my curiosity. If it kills me, so be it.