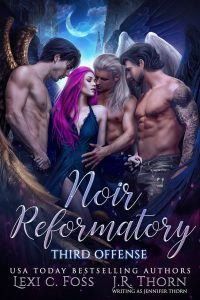 So, I have a third mate.
No big deal.

Except, Auric punched my royal—descended from gods—betrothed right in the face.
Novak has murder in his eyes, more so than usual.
And my body is screaming at me to take all three males and teach them who’s in charge here.

Because I believe the truth now. I’m a Noir royal, descended from the gods themselves and destined to fix the history my fake-father forged. The one where black-winged angels were the result of sin and scandal instead of the truth.

My black wings mark me as a superior being, one that will reunite Angelkind to the glory they once were.
But first, I need to get my three mates in line and keep them from killing each other.

Ketos, a prince with gold-tipped wings, has a legion of Noir on his side, technology and power that we’ll need to play Sayir’s game. Not to mention he has always been destined to be my mate, a fact I know is as true as the sun and the stars.

Novak, my lethal weapon, has been blessed by the gods, chosen to stand with us and slay our enemies.

And Auric, my Commander, my Nora, represents everything I want for a new world, one where Nora and Noir work together like they were meant to.

It’ll take a miracle, or divine intervention, to convince these three males to work together.
It’s my ultimate test.
A trial that I must pass.
Because if I can’t bring my mates together, how am I supposed to unite a lost world?

Mmm, cherries, I thought, inhaling deeply as the fragrance twisted in a seductive curl beneath my nose. Leather. Smoke. Wintergreen.

An intoxicating combination that shouldn’t have appealed as a collective perfume, but it called to me on a deep-seated level that told me my mate had finally arrived.

I knew we would be compatible based on our origins. However, I hadn’t expected her scent to so utterly consume me.

It made walking difficult, my body strung tight with the need to claim.

That wasn’t how I wanted this introduction to go. Although, I wouldn’t be disappointed if she ended up naked beneath me after a brief “hello.”

My lips curled at the prospect. I didn’t even know what she looked like yet, but I wanted her. Because that scent was fucking mouthwatering.

I followed it with my nose, inhaling deeply and allowing it to swathe me in a cloud of need. My mate. My Layla. My future queen.