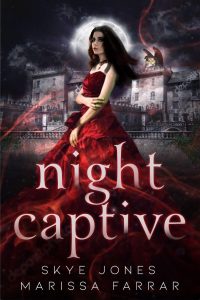 One girl, five monsters, one hell of a ride.

Taken from the Pit where she was raised, Aisha believes all vampires are horrifying…  Then she finds herself in Dashiell’s possession.

Powerful, handsome, and charismatic, Dashiell is not what she thought her master would be.

His dark desires draw her into his world, and things heat up between them.

But with a demon gargoyle scratching at her window, and wolves sniffing at the door, Aisha might not stay in the vampire’s grasp for long.

Danger and temptation surround her on all sides, but Aisha is determined to fight them all.

I should be terrified. This huge creature sitting on my bed was, objectively, terrifying. But my God, he was beautiful too. Those wings of his were incredible, and I wanted to touch them. His body was nothing but huge, powerful muscle, and his skin almost sparkled. As if under the surface there were a million tiny stars.

For some reason, this massive creature terrified me less than Dashiell did. I sensed something within him, something sad, melancholy, and lonely.

“You’re lonely,” I said before I could stop myself.

The creature…Gideon, looked at me, considering. “Is that an educated guess, Aisha, or can you sense it?”

I said no more. Unsure of who I could trust, I came to the conclusion it was best to keep my mouth shut.

“I’d love to know what your skin feels like,” I said instead, knowing it was a distraction, but also the truth.

“I will untie you. Don’t try anything stupid, or I’ll have to hurt you.”

“Oh, don’t worry, I won’t. I’ve seen more than enough of the horrors out there.” I shook my head, trying to dislodge the vile replay of what I’d seen out in the Citadel.

Right now, all I wanted was to feel something, anything to obliterate the horror, and Dashiell had brought this creature to punish me, but he couldn’t know it might be what saved me. If Dashiell himself had tried to touch me after what I’d seen, I’d scream the Citadel down, but this creature. He was a captive like me.

He reached over me with those powerful arms of his and carefully untied the knotted rope at my wrists. I rubbed my arms to bring the life back to them.

Then he untied my ankles, and I rubbed them too. Once I could feel my extremities again, I turned my attention back to Gideon.

What was happening? Dashiell had hinted I was more than simply a normal human from the Pit, that I had rare blood, and now I sensed things about this creature that made no sense. I felt his soul, almost; that was the only way to describe it. What I sensed was harsh, and angry, but also sad, and so desolate and alone that I wanted to wrap my arms around the massive hulk of a male by my side and sing soothing songs to him.

Instead, I reached out one tentative hand and touched his strangely sparkling skin. It was warm. Not as warm as mine, but not as cold as Dashiell’s.

“Are you alive?” I asked stupidly.

“In this form, yes. But Dashiell is alive. He’s just a different version of life.”

“Yes, I’ve gathered that. It seems life and death aren’t quite as black and white as I had believed. Although, once truly dead, then there’s no coming back. The dead can’t walk again, and I know now that even Dashiell can meet that ultimate end.”

I realized I’d said far too much and cursed my stupid mouth.

Gideon’s next words shocked me. “The dead can walk the Earth again, and I have raised them before. I had an army of the dead once.”

What the hell? That unease I should have felt when he first entered the room began to creep in.

“It’s a mere parlor trick, though. That’s all. Reanimating skin and bone. It terrifies the humans, but it’s nothing but a trick.”

He got onto the bed fully, on all fours, and crawled over me. I shrank back, the unease building to outright fear.

“Aren’t you the intriguing one?” he whispered in my ear, distracting me.

I shuddered at his breath touching me and wasn’t sure whether with repulsion or something altogether more messed up.

“Why do you make me feel so…much?”

“All in good time.” He cupped my cheek with one massive hand and looked deep into my eyes. “I’m going to make you feel so much more, Aisha. You’re going to scream by the time I’m done with you.”

Then he took my mouth in a kiss, and something elemental exploded in my body. The moment his lips touched mine, it was as if something inside me came to life. It roared, and it shook me to the core because this part of me was…untamed. Wild, even.

“Yes, Aisha,” he murmured against my lips. “Let yourself feel it.”

He looked down at me, and at the white nightdress I wore, and then with terrifying strength he ripped my garment from my body as though it were paper.

I was almost naked now under his bright, fierce gaze, only my panties protecting my virtue.

I ought to push him off, or try to fight him, but I was so aroused at the way he looked at me, and with his big, primal body over me, that I didn’t do anything but breathe heavily as we stared at each another.

“Dashiell wants me to turn your pretty behind pink. He told me not to go easy on you. I won’t, not because he orders it, but because you don’t need easy, do you, Aisha. All that guilt and sorrow that you feel. You can let it out now. Here. With me.”

His words terrified me, but also wound me up even more. What was he going to do to me?