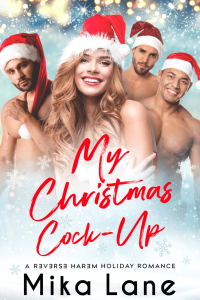 The cabin I rented in the mountains for Christmas? Turns out three guys rented the same one. At the same time. And now they won’t leave.
After getting my heart broken, all I want is a holiday alone in a cabin in the mountains.
But three very hot men claim they’ve rented it, too.
And NO ONE is willing to leave.
It seems my little getaway just got a lot more crowded, and when it snows, we’re really stuck.
But I learn that the tall one likes hot…chocolate in the afternoon.
The athletic one is big…on holiday spirit.
And the last gives…the kind of gift you never knew you needed.
What’s a girl to do with holiday surprises like this other than ring in the yuletide between the sheets?
Santa won’t be the only one coming this Christmas eve…not if my three sexy cabinmates have anything to say about it.

I was getting ready to come again when Drew pushed Lincoln out of the way and lifted me to my feet. I weakly followed him as he lay on the floor. He rolled a condom over his dick, pulled me on top of him, and with his hands on my thighs, looked at me.

“Wanna ride me, baby?” he growled.

Of course I did.

I hovered over the erection he held in his hand and slowly lowered myself. As my pussy opened, there were hands on my ass, parting my cheeks as Drew’s cock slipped in and out.

“Fucking hot,” Caleb said. “You should see your hungry pussy, swallowing Drew over and over.”

Lincoln came over and put one of my hands on his own erection, which I began to stroke. At the same time, Caleb pried my ass cheeks open and began to lick me… back there.

With my hand on Lincoln while riding Drew, Caleb had gotten my ass wet enough to press a finger against my puckered hole.

“Oooooh,” I groaned as he entered me slowly.

I complied and then shrieked at the strange sensation of having my backside invaded. But with my full pussy, it was amazing.

Caleb pumped me back there while Drew had my pussy. Lincoln fucked my hand until he suddenly spurted all over the side of my face and neck.

I released him and the double penetration I was getting from the other guys was quickly more than I could handle.

Pushing back on the dick in my pussy and finger in my ass, I lost track of time, bucking my head like a greedy little animal—I was literally in fucking heaven, and all I could think of was how I wanted it harder and deeper.

And to basically never end.