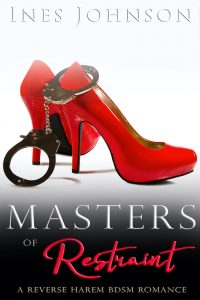 My new boss is good at giving orders. But his latest demand is NSFW. Especially when his two business partners want in on our deal.

What 21st century, workaholic, career woman with a drawer full of BOBs and batteries would pass on three rugged alphas intent on scrutinizing her assets? But if anyone at work finds out about our NSFW activities, my reputation in the corporate world will be ruined. Worse, if any of the three of them discover I’m falling for them, they’ll drop me faster than a bad investment.

If you love steamy romance that packs heat as well as heart, then you’ll love the Her Masters series where a woman who thinks she knows what she wants will meet three men who give her exactly what she needs.

I lay on the bed, looking at the ceiling. I should be questioning my life choices right now. Not my whole life, just this moment. But my brain was being muted by the rest of my body’s desires. My brain was so not used to having a moment’s silence that it didn’t know how to react. So it remained mute, and I let a stranger run the bristled twin of rope up my bare leg.

My body shivered, telling me that I’d made a good decision. Master Kaiden wasn’t touching any of my good parts. Just my ankle, my knee, the inside of my elbow. Yet I was already quaking.

It had been a long time since I’d had an orgasm. Well, that wasn’t true. I’d had plenty on my own. Like any modern woman who was more focused on her career than her relationships, I was a toy connoisseur. It had been a full year since I’d been penetrated by warm flesh.

Well, that was all about to change.

Master Kaiden wound the rope around my left wrist. I watched him with the wide eyes of a little girl witnessing a magic trick. He looped the rope into a knot, then bound me to the bedpost with just a flick of his fingers and a tug of his clenched fist.

He repeated the process three more times. My right arm. My left leg tied to the bottom post. My right leg followed suit. I was bound like a starfish on the bed, body open for him to see.

My brain stopped all thought, all logic, all reason. I just felt.

I was bound. At his mercy. He could do with me as he pleased, and he’d promised pleasure. There was nothing I could do to stop him. He hadn’t even started yet, and already it felt wonderful.

“I think she’s going to come just from the restraints. You really do need this, don’t you, beautiful Maree?”

He was right. Strapped to the bed, arms to either side, legs to either side, I only had enough flexibility to bend a little. There was a spike in my heart. But it wasn’t fear. I was trembling with excitement.

“Please.” Even that single word was a struggle to get out.

“Of course, sweetheart,” said Master Kaiden. “Now, what was it you said? Fucked, fingered, tongued, or even toyed?”

I opened my eyes, unaware that I’d even closed them until the dim light of the room made me wince. Master Kaiden was at the wall of sex toys. He reached for something that looked like a magic wand. Only instead of a bulbous head, it had an attachment that looked like a tongue.

“Is this the one you want feedback on, Sam?”

The man with the white hair nodded from his place in the chair. Instead of the knees wide open man spread that would’ve shown me his groin, he had one leg crossed over the other, as though he were a scholar watching a presentation.

He watched me impassively. It felt like those piercing blue eyes were cataloguing my every twitch and hitch of breath. Like he was that scholar taking notes, just not writing anything down. He kept it all in his head.

The sound of buzzing filled my ears. Master Kaiden was lubing up the sex toy. I hadn’t noticed before, but the toys were in a variety of colors. He’d grabbed the pink one.

“I never buy pink products,” I said as though that were explanation enough. Apparently, it wasn’t. “You know, because of the pink tax.”

“Products for women are exactly the same as for men, except they paint them pink and charge extra.”

Master Kaiden looked to the snowy-haired Sam. Sam pursed his lips. I wondered if I’d offended him. I needed to turn off my business brain again. I was supposed to be having a lot of orgasms, not giving a sales presentation.

Master Kaiden put down the pink toy and switched it for the blue one. “When you play with yourself, how many times do you come?”

I frowned at the question. Not just because my brain was on vacation. Because the question didn’t make any sense. “Once.”

That was a feat in and of itself. A majority of women never orgasmed. I was proud to count myself amongst the lucky few. Though I had hoped to one day be counted amongst the women who could come from a man penetrating her. In my twenty-five years of life, that had never once happened. I’d have to get myself off after, or sometimes before, just so I could get in the mood to let him have at me.

I’d always thought I could come from actual fucking if a man tied me down. I’d never trusted a man enough to do that. Until now.

Sam rubbed his thumb over his lower lip. Again, those blue eyes penetrated me. I felt a stir deep in my pussy, as though he was calling an orgasm forth just with his intense stare. I wanted to close my legs. But he wasn’t looking between my thighs. He wasn’t even looking at my bared breasts. His gaze was on my face.

Without any preamble or warning, Master Kaiden put the device on my pussy. He made a pumping motion with his fist. How had I missed the toy’s suction cup? It latched onto my labials like a mouth would in a permanent sucking position.

My breath was already coming in short pants, just from the attention I was getting down there. Then Master Kaiden flicked a switch. The tongue apparatus came out to play, and I jackknifed off the bed. The orgasm slammed into me before I knew what was happening.

I’d had head before. Never long enough to make me come. The few guys who went downtown did it as a courtesy, just a quick stop before they were unzipping their pants and expecting me to take the long route with their dicks.

This little mechanical tongue was giving me more attention, more skill, more care than all of the men in my sorry excuse of a sex life together. I was going to marry this tongue. I was going to have its little blue-tongued babies. I’m sure it was getting me pregnant right now as it flicked over my clit and around my labials.

The rope held me fast and sure as I came. Hard. The contractions were so long, so intense, that I was certain I’d pass out. My inner walls were still pulsing as Master Kaiden released the suction of the toy. The vibrations of the mechanical tongue fell away.

“Ninety seconds,” said Master Kaiden. “I think that’s a record for one of your toys.”

Ninety seconds? I’d never come so fast in my life. Not by my own hand, or one of my BOBs. I’d heard that it took most women up to twenty minutes of activity to achieve orgasm. Which was likely why none of my Speedy Gonzales human boyfriends could get me off. Even my vibrators took about ten minutes of play to do the job.

My eyes were closed from my world being rocked in under two minutes. I heard the man in the chair sigh as though he were disappointed.

I opened my eyes to see Sam no longer looking at me and my naked, trembling body. He was looking down at his phone, thumbs moving furiously as he typed.

Like any woman could fake an orgasm with that kind of motor and material. As soon as he released that toy into the world, women all over the earth would be dumping their boyfriends and stocking up on Double A batteries.

“Don’t mind him. Sam’s a perfectionist.”

“I’m a genius,” Sam muttered, not taking his gaze off his phone. “There’s a difference.”

“Let’s get you another orgasm. How does that sound, beautiful Maree?”

My body tensed at the sound of my boss’s name. I’d completely forgotten Mr. Brooks was in the room. There he was, standing at the edge of the bed, staring at my dripping wet and still quivering pussy like I was the cream he wanted to put in his black coffee.