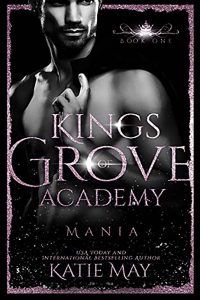 The kings who rule Grove Academy don’t scare me, not with their gentle touches, sweet words, and smiles reserved only for me. But maybe…

Maybe I should be scared.

We watch her. Protect her. Love her.

But how can we be psychopaths, when we protect the one person who deserves it? Someone so sweet and innocent, she’s completely oblivious to the horrors plaguing our elite town?

The cops call us serial killers.

We call ourselves hers.

The man dies with a scream painted on his lips, a macabre slash of red on pasty skin.

Revulsion fills me as I stare at his decapitated body, his head rolling a few feet away before landing at Dominic’s feet beside the bone saw we just used. I’m not disgusted by his death. The exact opposite, really. The fucker deserves everything we gave him and then some.

I’ve never claimed to be a good man. And headless Simon will certainly agree with that sentiment.

But I don’t kill indiscriminately. I don’t hurt people just because I have an itch I need to scratch, a desire to inflict harm on as many people as possible.

This despicable man, like all of my other victims, doesn’t have that same mentality. He kills without remorse, without thought to the innocent women and men forced from this world too soon because of his twisted games.

I suppose you can say I’m a motherfucking hero. I

“This is going to be a fucking mess to clean up,” Dom grumbles, grimacing.

“Someone” —I turn to give Ryker a pointed stare— “has a flair for the dramatics.”

Because while I much prefer clean kills, like a simple knife to the throat or a gunshot to the head, my friend enjoys having fun with the bodies. Lacerations cover every inch of Simon Muller’s disgusting figure, the blood no longer running freely in death. The vulgar scent of piss permeates the air because fucking Simon apparently doesn’t know how to hold his urine in during torture.

Zane dances on the balls of his feet around Simon’s corpse, singing an off-key version of “It’s Raining Men” but swapping “men” for “heads.” He thrusts his hips, gives a dramatic twirl, and then pulls on a pair of surgical gloves that he always keeps in his back pocket. You never know when you need to hide a body, especially in our line of work.

His dark hair glints like obsidian in the moonlight, illuminating a smear of red across one of the locks. That red extends down his face, stopping just above his curled lip.

“I should have this taken care of in less than an hour,” he assures us as he picks up the head. The rest of us, minus Ryker, make faces, but Zane seems unconcerned as he pretends to use it as a basketball. “Beckett, catch!” He turns to throw it in Beckett’s direction.

“Fuck off,” Beckett snaps in disgust, his haughty British accent even more pronounced in his agitation. He takes a step away from Zane and the head before reaching into his blazer’s pocket, grabbing a handkerchief, and daintily wiping off his hands. The fucker didn’t even touch the body, afraid he of getting blood splatters on his loafers, but I don’t dare call him out on it right now.

There’s a reason Beckett’s a part of Mania, and it’s not because of his extreme OCD or fear of germs. He’s just as fucking crazy as the rest of us, and he’s even more crazy about his cleanliness than anyone I know—a fact I tease him mercilessly about. But considering how on edge he is right now, how close he is to snapping, I know it won’t be worth it.

Even understanding that we were gonna kill someone tonight, he chose to dress for a night out in brown khakis, a fitted sweater, and polished loafers. His brown hair has been stylishly slicked away from his clean-shaven, aristocratic face.

“You guys are all a bunch of idiots,” Dominic murmurs. He strides to the back of my pickup truck and removes a tarp, draping it over the ground. The ruffle of the plastic is the only sound besides the intermittent chirp of crickets, their songs somehow both ominous and beautiful in the pitch-black night. There is nothing around for miles except grass and stalks of corn. The wind whistles through the silos as the moon casts silvery ribbons of light across the abandoned field where we stand. “Landon, help me with this.”

Heaving a sigh of agitation, I crouch down and work with Dominic to roll the body onto the tarp. Luckily, it’s a short trip to where we will dispose of Simon. Zane’s farm is massive, filled with miles of corn fields and pastures in all directions. It’s the perfect place to not only murder someone, but also for my favorite part of the night—the cleanup.