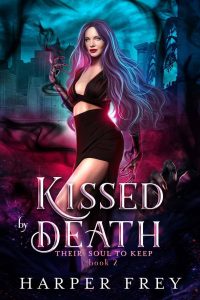 Nothing in my life is as it seems.

The four men who saved me have been keeping secrets—big ones—and their revelations shake my world to its foundation. They tell me I’m not who I think I am, I’m not what I think I am, but there’s more to the story; I know there is.

We’re bound together in ways I don’t fully understand, but it’s becoming clear they’re not only my future but my past, too.

The unrest in the Shadow Realm is leaking into my world, and I seem to be at the center of it. Monsters lurk around every corner, and the people I love are in danger. The Horsemen will do whatever it takes to protect me and mine, but if I am what they say, I’m not as helpless as I’d once believed.

My life has always been kissed by death—I no longer fear it. It’s time to become something new, something more because the creatures of my nightmares have crossed the veil.

Am I strong enough to stand beside the Horsemen and become something even monsters fear?

Flashes of the fight played across the backs of my eyelids as I tried to keep my breathing steady. “Raze?”

I sucked in a breath. “I can help with that.”

Raze was silent, my invitation hanging thicker in the air than the steam from the shower. “You sure, love?”

I slid the glass door open in response, and he stood, eyes on mine as he dragged his pants and boxers off with a wince. He was still shirtless from when I’d cut it off to patch him up. My eyes drank in every hard inch of him, cataloging  scars, tattoos, and every ridge and swell of his body. There was hesitation on his face, but longing, too. A hell of a lot of longing.

There was more than enough room for the two of us in the massive shower Shade had created, and plenty of showerheads to help me wash every glorious inch of Raze. He groaned when the hot water hit his body, dirt and blood streaming down his flesh before pooling on the tiled floor and swirling down the drain. As he stood beneath the flow, I grabbed a clean washcloth, lathered it with body wash, and crossed the distance between us.

Raze’s eyes opened and locked on mine as I gently ran the cloth over his jaw, down his neck, and over one shoulder. My other hand rested on his uninjured side, whether to steady me or him, I wasn’t sure. Neither of us spoke as I cleaned him reverently, this man who’d literally fought monsters and killed for me. I explored every inch of Raze as I circled him with a washcloth in hand. He moaned softly as I rubbed soap over his back, his abs, his hips.

“Harlow,” he groaned as I dropped to my knees, running my hands up his powerful thighs, kneading the round globes of his ass.

He inhaled raggedly as I drew the washcloth over his hip bone and dangerously close to the short, curly hair around his very hard dick.

“A princess falls to her knees for no man.”

My heart squeezed with affection, but I smirked. “Good thing I’m no princess then.”

Raze hissed when I lathered soap in my bare hands before drawing them over the hard length of him again and again. I let my hands roam down the insides of his thighs, over his hip bones, and around his ass as his breathing grew ragged and desperate. “Love…”