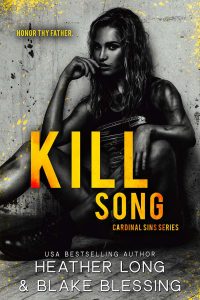 There are four types of serial killers.

I’m looking for one.

He’s male, likely in his forties or fifties now. He’s been killing successfully for more than three decades. I suspect even longer, though our timeline is based only on the earliest victim we’ve identified with his signature mark.

Seventy-nine kills that we are certain of.

A year ago, the unsub’s methods changed. It was a subtle shift. Instead of one or two bodies a year, five have been dropped. Forensic evidence remains inconclusive, but in my gut, I know something’s changed.

Either the unsub has a partner or he’s about to become a spree killer.

It’s only a matter of time before someone puts the coin into the right slot and the kill song begins.

Finding the unsub is my obsession. It was my father’s. He died without solving the mystery.

Was I seeing things? I hoped so, because it looked like a man had a woman pinned to the wall. It could have been the shadows, giving them a sinister vibe. Maybe it was a lover’s quarrel. There wasn’t any screaming that I could hear.

But they were pretty far down the alley…

I forced myself to keep walking, unprepared for how heavy each step would be as I lost sight of the couple. My instincts were shit, part of why I checked myself into Lancaster in the first place, so I was probably imagining the wrongness of the scene.

See Something? Say Something.

Had that been a coincidence seeing that sign? Or a cosmic clue?

Fuck. It wouldn’t hurt just to check the couple out, make sure the woman was fine.

Retreating a handful of steps, I glanced down the alley again. I probably didn’t make the most inconspicuous of figures sliding up to the edge of the alley and gazing around the corner like some great ninny with his duffel bag over one shoulder. Don’t call me a peeping Merrick or anything, but see something, say something was a great idea. Still, I kind of didn’t want to cock block strangers if I’d misread the situation.

However, the guy had the woman pinned with the wall, a hand around her throat and he seemed to tower over her. Granted, they were silhouettes amidst the shadows. Even cars in the distance seemed louder than any sound coming from the alley. Indecision bound me in place.

They were right outside a bar. They could be going for an alley quickie. She could be a prostitute and this was how she planned to pay her rent. Interrupting would be rude, particularly when I didn’t have any cash on me to make it up to her if I scared off the john.

Dammit. Now I felt like a peeping Tom. Still, I lingered and when the man in the alley started lifting her up by the throat, I forgot all about my objections. The last time I checked, that wasn’t a safe kinky sex practice. He would kill her or at least do her serious bodily harm.

My body moved before my brain fully processed what I would do when I got there. The guy towered over her, but I wasn’t a small man. Still, I never thought of myself as a fighter. Right up until she hit him and he backhanded her. Though he let go of her throat—a good thing—she bounced off the side of the building and the rest of me saw red.

I slammed into him, fists flying. It was like every other part of my brain turned off except for the part that said get him the hell away from her. My knuckles split with every blow I landed. The man staggered under my weight. While he seemed like a behemoth from afar, the collision of my fists with his face almost seemed to bring him down to normal proportions.

A distant part of my brain just observed the action. I was not a violent person. Not self-described or even diagnosed by anyone else. My time in the sanitarium had been more about my overwhelming need to please and inappropriate attachments to people after a painfully short acquaintance. This? This wasn’t like me.

And yet, I didn’t stop. Each time I considered pulling back, the image of her being hoisted above him by one arm flashed across my mind’s eye. He’d hurt her and if it was a kink thing, then she wouldn’t have been fighting to get free, right?

Something wet splashed against my face and the hot spray of it jolted me out of the madness. My breath exploded out of me in harsh pants and I glanced from the bloody mess of the man below me to the woman who stared at me with a stunned expression.

The shadows softened her features, caressing them like a lover and I swore she seemed more a part of them than our world. Holy fuck, she was beautiful.

And I saved her.

Wow, the adrenaline pumping through my body was giving me such a high. I’d never been a hero before. It was like the universe bestowed this woman on me and I was her guardian angel. I almost started bouncing on the balls of my feet, but shit, that might scare her.

“What the fuck did you just do?” She sneered down at the man, kicking his upper ribs with the sharp point of her high heeled shoe. His body jolted, but only from the force of the hit. “He’s dead.” Her mouth formed into a perfect pout, and I wanted to kiss it. Take it away.

Then what she said registered. Dead?

Forcing my attention away from her, I glanced down at the man. His face was hardly recognizable. There was so much blood, but…it looked slightly concave.

Had I done that? Lifting my hands to catch as much murky light from the street as I could, I winced at the blood speckled forearms and heavier coating on my knuckles and fingers.

I should probably get a blood screening done. If I’d opened any scrapes on my hands, I didn’t want to catch anything from that filth.

That could come later, my first priority was this beauty. She could be scared, shaken up. Maybe even hurt.

“We should call the police, have an ambulance look at you.” Swiping my hands down my pants to remove as much blood as I could, I stepped closer, stretching a hand out to move her hair from her neck. I hoped this filthy animal hadn’t bruised her.

“No cops. I’m fine.” Her words were clipped, but the throaty tone made my cock twitch. That wasn’t the voice of an angel, more like an avenging temptress here to sing me to my death.