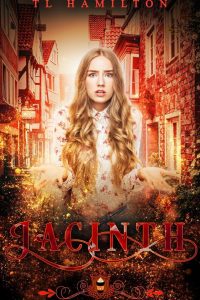 Jacinth has been haunting the Silver Springs cemetery since her death.

When a weeping stranger insists on loaning her a curious-looking amulet, things get interesting. 24 hours of flesh and blood and she can’t wait for her first taste of coffee in two years.

With a little magical push, three brothers may prove to Jacinth that the time of her life may just happen after her death.

All is not as it seems in Silver Springs, though.

With the arrival of a suspect priest reportedly on a mission to send the cemetery’s inhabitants on to the afterlife, and the Fates taking a particular interest in the budding relationship, will Jacinth and her men find a way to LIVE happily ever after

Jacinth is part of the Silver Springs universe and comes complete with a happily-ever-after. Scroll up to read this fun, quirky romance today.


This is a reverse harem novel, meaning the main character has more than one love interest, and is intended for audiences 18+

It started with a strange man weeping at my gravesite.
Not pretty weeping either. Snot and tears ran freely down his face. I was on the fence about whether to be flattered or grossed out. He was beautiful, though. Dark hair in need of a cut fell into eyes that—even bloodshot—were a pretty blue. Lighter than a summer sky.
Wasn’t I feeling poetic, I thought wryly and drifted closer to him. His head snapped my way, and I reflexively popped out of the mortal plane.
The world waxed instantly into shades of gray, like clouds passing across the moon, and the light breeze no longer stirred my hair. I sighed, frustrated with the lyrical direction of my thoughts. I was not going to be a stereotypical ghost, for ghoul’s sake. I’d only been dead for six months.
The Silver Springs graveyard was not a quiet place to be ‘laid to rest’, and a large percentage of the undead population turned to creative pursuits in their afterlife. Idiots thought they had some insight into the mortal condition, having bowed out of the running and taken time to reflect on things left unfinished.
If you died at ninety and still felt you didn’t get through everything, that’s your own damn fault. I shouldn’t have to hear the sonnets every night of the week.
I’m looking at you, Gladys, I thought unkindly, glancing at the headstone of a sea witch who had been taken by old age in the 1700s. She was still bemoaning the sailor she hadn’t dragged to his watery death three-hundred odd years after the fact. All well and good, but the old bat could not hold a tune and she often threw her dead flowers on my grave.
So. Rude.
The sound of a twig snapping behind me brought my attention back to the current situation.
Ah.
He hadn’t been looking at me at all. My beautiful—very much alive—twin, Birdie, came into view. The man stumbled to his feet and brushed himself down.
“Jac— oh…” He stopped, his hand half raised toward my sister.
Birdie paused, clearly having just noticed she wasn’t alone.
“Uhh… Have we met?” she asked, taking a careful step forward.
“Oh, yes. Yesterday. Or… was it next year? I do get awfully confused sometimes. You look so much like her.”
Birdie froze. “Her? Jacinth? I’m sorry, did you know her?”
The man nodded firmly, and I was officially lost. I would remember meeting someone as beautiful as him.
“I will.”
“Will… meet her? I hate to break it to you, but she died… six… months ago.” Birdie choked the last part out, same as every other time she had mentioned my untimely demise.
You would think she missed me or something. Being a twin, we were linked at a soul level, meaning she had no trouble seeing me when I chose to be on the mortal plain. We had pretty much picked up where we left off after I died. Only our choices of hangouts—haunts, if you will—had become limited. I couldn’t leave the confines of the cemetery.
It wasn’t as bad as it sounded. There were plenty of inhabitants. Plus Ruby—the angel who owned a shoe store in town—came and visited regularly.
I missed shoes. I’d had quite a fetish for them in life, so Ruby was kind enough to wear a different pair every time she visited. She modelled them for me as though I might one day be in a position to buy some. It was a fun game. I wished I’d met her while I was still alive. Her store sounded amazing.
Also, I frequently got to watch free porn. There was a vampire female who often jumped her mates around here. I could do without her choosing to perform the act on my grave, but at least it was entertaining.
Ghouls, I missed sex. Never would have been with someone like this guy, though. He was too pretty, and I got tongue-tied around that kind of male. The good thing about being dead was I could fantasize about whoever the hell I wanted to.
“Skyler! Are you out here?” The shouting started a way off and grew quickly, concern clear in the voice.
Leaves crunched nearby, and I held my breath as the owner of the voice came into view. Oh, dear Casper! Another stunning male specimen.
Tattoos—runes of some sort—ran down his neck and over his broad chest, down his arms, and disappeared below the tight waistband of his jeans. His black hair was short and looked wet, even from this distance.
It didn’t occur to me to wonder why he was shirtless. I was enjoying the view too much. A beautiful amulet hung to the middle of his sternum and seemed to glow slightly. But that would be crazy, must be the shadows. I moved behind the nearest tree and stepped back into the mortal realm to better appreciate the sight of him.
The crying man—Skyler?—cast vacant eyes toward the new arrival. “She’s here. I know she is, Orion. Where is Niko? He should be here too.”
Orion didn’t look like he was in the mood to have a discussion of any sort, and I watched curiously as he attempted to shepherd the snotty crier from the gravesite with a tight smile for Birdie.
With a lunge, Skyler grasped the amulet, ripped it from Orion’s neck, and thrust it into Birdie’s hands.
“No!” Orion shouted, and lurched to reclaim the obviously valuable piece.
“Twenty-four hours,” Skyler said, holding a hand out. “Twenty-four hours and everything will change.”
He turned back to Birdie.
“You need to give it to Jacinth.”