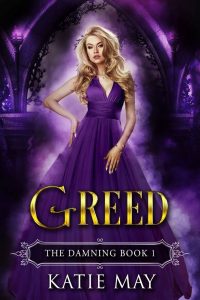 For hundreds of years, Nightmares have ruled the world.

Descended from the Seven Deadly Sins, these supernatural creatures have enslaved and tortured the human race.

I have lived my entire life fighting back against the monsters that have plagued this world. A deadly assassin and a member of the resistance, I only have one motto: kill or be killed.

When The Damning commences – a fight to the death against the world’s most brutal serial killers, assassins, and torturers – a twist of fate finds me as one of the competitors. Despite my initial reluctance, I find myself eagerly participating.

But what I didn’t count on, however, were the seven princes:

Lupe, a Shifter descended from Wrath.

Devlin, a Genie descended from Greed.

Jax, a Vampire descended from Gluttony.

Killian, an Incubus descended from Lust.

Ryland, a Shadow descended from Pride.

Sebastian, a Mage descended from Sloth.

Dair, a Mermaid descended from Envy.

Our love could never be. I’m an assassin, and they are my targets.

But who ever said I needed to follow the rules? If only I can survive The Damning…