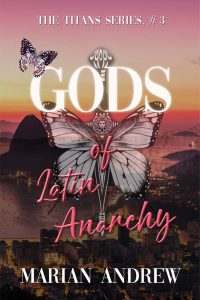 And then there were three….

Who is Oscar Santos?

That is precisely what the authorities want to know.

He’s being held at an immigration detention center for illegal migration and risks being deported or, worse, charged as a possible terrorist for falsifying his documents when he joined the Marines.

On top of everything, Carter has disappeared from Ava’s bed in the middle of the night without any explanation. He’s gone underground and is orchestrating a scheme to get Oscar back home, but it’s dangerous, risky, and illicit.

Over a distant but watchful eye, Carter, the mastermind behind the plot, instructs Ben and Ava to carry out a series of tasks while he keeps himself under the radar of the local authorities.

How far are Ava, Ben, and Carter willing to go to get Oscar back home?

Steamy, Hot, Illicit. A reverse harem dark rom-com. It’s a story about a girl, three guys, a wrongful conviction, a covert mission, and an affair gone wrong with a spicy curry.

About The Titans Series:
The Titan Series is a group of reverse harem contemporary romance novels. Each book in the series introduces a different story about Ava’s adventures and life journey with her three male roommates. Reading the books as a standalone with a HEA chapter ending is possible. However, the epilogues of each book in the series act as the introduction to the next book and will end on a cliffhanger.

GODS of Latin Anarchy is a full-length reverse-harem romance novel, the third in The Titans Series.