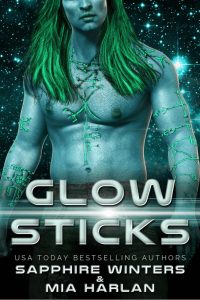 Welcome to the Garrnex Mating Games, where the galaxy’s fiercest warriors battle to claim their prize. Today, it happens to be me.

Tired of my dead-end-job and crap social life, I take the first opportunity I can to ditch Earth. I’m sure it’s the best decision of my life—until I’m stripped naked and dumped at the Garrnex Mating Games.

The brutal alien warriors in the arena fight to claim me, but only the triad of hulking Namoxi warriors remain standing,

These three alien brothers are different from anyone I’ve ever known. Now that they’ve won their prize, they’re ready to claim it, and they expect me to surrender, body and soul.

Maybe I should have taken the time to learn about every alien race out there, but it’s too late now. And honestly, there was never any point. I’ve always known that I wouldn’t be able to choose which aliens would claim me—so I was better off going in blind. That way, I could not be disappointed.

“Let’s get this over with!” one of the green aliens wearing chain mail shouts.

The warriors that flank him let out matching battle cries, and then they all rush across the field, almost as one.

They raise their axes, and my heart nearly stops cold. Because I think this is the first time that I realize that things are about to get bloody.

“Close your eyes,” a man orders from directly behind me.

I let out a shriek and spin around, my eyes snapping to a blue chest with swirling green tattoos.

“I’m Troza. Remember it, because you’ll be mine soon enough.” He lets out a possessive growl. “Close your eyes while I help my brothers. Don’t open them until I come back. Understand?”

He tilts my chin up, and I whimper. His fingers tighten, and I feel my body reacting to how near he is.

He lets go, and remembering his words, I close my eyes. I’m glad that I do, because battle cries echo around me. Metal clashes against metal. There are roars. There are shrieks of pain. It all blends together until there’s one last grunt, and then everything goes quiet.

“And we have a winner!” an announcer shouts over the loudspeaker, her voice echoing through the ring.

I expect cheers, but there’s only silence.

My heart nearly stops as I hear one set of footsteps heading toward me. Just one.