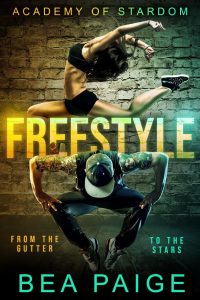 From the gutter to the stars…

Dance is in my blood.
It’s what keeps me sane, out of trouble. It used to keep them out of trouble too.
A group of boys I grew up with.
Xeno, York, Zayn and Dax.
We were a crew once and we ruled the clubs.
Separate we were insanely good, together we were unbeatable. F*&ing on fire.
I was their girl and they were my Breakers.
Until they did something they promised they never would; break my heart.
We were seventeen when they left me.
You see, for kids like us, dance was all we had.
Growing up in a rundown housing estate in London with no prospects can make you view the world differently.
It can make you choose the wrong path.
I chose dance, and they chose crime.
Three years later I’ve won a scholarship to Stardom Academy. I try to forget my past.
But how can I do that when the four boys who hurt me are back?
And this time they’re following in my footsteps and joining the academy too.

“So, we meet again.” Xeno’s voice is a low rumble, and much deeper than I remember it, and just like when I was a kid, I have to lean my head back to get a good look at him. I barely reach his shoulder.

Where did the boy I once knew go, and who is this man? My skin flushes and my stomach tightens. I let out a whimper, but quickly cover it with the sound of my surprise, clearly not mentally prepared for this moment.

The chatter of the crowd and the sound of the MC getting everyone excited for the upcoming battle is drowned out over the rapid beating of my heart. When we first became friends I’d always appreciated that Xeno was a good-looking kid. I got why he had a string of girls following him about, but I’d never really looked at him the way they did until that night when I caught him dancing bachata. I’d fallen for him hard. He was, and still is, fucking beautiful. He’s tall, lean, built. Even under the casual slacks and loose t-shirt, I can see that. He’s effortlessly cool, sexy, and he still makes everything inside simultaneously flutter and tighten into a coil. Goddamn him.

“What are you doing here?” I whisper, unable to find any other words to cover my shock at seeing him again. Zayn was hard enough to deal with. I have the sudden inexplicable urge to reach up and tug on his mop of curly brown hair which is styled in such a way that shows off his blazing green eyes and the very sharp cut of his jaw shadowed with stubble.

“We’re here to reclaim what’s ours…” he snarls, a cruel glint in his eyes that belies the person I remember. He was always a hard arse, but never cruel, at least not to me.

“The Breakers are back and this time we’re staying.” He sidesteps slightly, dropping one hand so that I can look around him.

My eyes land on Zayn first who jerks his chin and gives me a dangerous smile beneath the shade of his cap. Beside him, propping up the bar is York looking less like Edward Cullen and more like Eric from True Blood. He’s wearing a black leather jacket and boots, with distressed blue jeans. York meets my gaze, and my heart stutters. This time there’s no warm smile, no genuine affection in his icy-blue gaze. There’s nothing but a blank mask. He raises his shot glass to me then knocks back the dark liquid in one go. Xeno’s grip tightens on my upper arm as he shifts me back around.

“Fuck, Tiny, you always were a little dense. I thought you might grow out of your naivety by now though. Looks like nothing’s changed.” He lets me go roughly, and wipes his hands down his jeans as though I’ve dirtied him up somehow.

I’m too shocked to think up a cutting response. By the time my brain kicks into gear and I’m ready to verbally spar with Xeno like the good old days, a familiar song starts to play out over the speaker system, and I’m rendered speechless.

No! No, fucking way. A cruel smile carves across Xeno’s face and I grow cold.

“We have our first challenge!” Little Dynamite calls out. The crowd roars, but my heart sinks.

“No,” I whisper. He just laughs, looking down the length of his nose at me. His gaze cutting into mine.

“The infamous Breakers are back and guess what…?” Little Dynamite continues as Xeno crosses his arms over his chest. Beside him, Zayn and York appear. All three of them glare at me. I swallow hard, my throat closing over with pain.

“What?” the crowd roars back, getting into a frenzy.