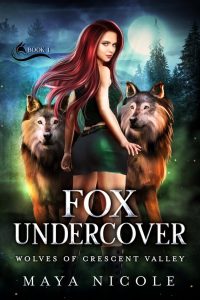 My assignment was simple: go undercover and report back about wolf sightings in the area.

Instead, I found myself in much deeper with the wolves of Crescent Valley than I’d ever imagined. Lone wolves are mixed up with dangerous humans who know our secret, and it could put all shifters at risk.

Making matters worse, my feelings start to grow for my alphahole boss who has the weight of a secret on his shoulders, a delicious psycho who is obsessed with me but melts my heart, and a mysterious fighter who has something to prove.

Can I protect them while protecting our kind, or will everything crumble around me?

Satan’s asshole. That’s how I would describe what I stepped into from my air-conditioned car. The asphalt in the parking lot was so hot the soles of my shoes would have melted if I didn’t get off it quickly.

Crescent Heights was deceptive to an outsider. Located in the northern part of Crescent Valley, it was close to the mountains and surrounded by lush landscape. Looking at pictures and driving through, one would never guess it was eighty gazillion degrees in the summer. If I’d learned anything during my twenty-eight years, it was that appearances often covered up what was truly underneath.

Crescent Heights not only was hotter than hell, but it was also where lone wolves often chose to live. Wolves needed a pack, the structure and leadership keeping them in control of their animal and their mind. At last count, over one hundred lone wolves lived in the various cities and towns in Crescent Valley.

Smoothing my skirt, I headed across the parking lot, already knowing I was being watched. There were cameras on every lamppost and several along the side of the three-story brick building. They were hidden well, but not well enough to escape the notice of a well-trained eye.

A place didn’t just have that many cameras without someone watching on the other side. Coming into my undercover assignment, I knew things could possibly be dangerous for me; the necessity to have no contact with anyone while I was there was vital to make sure I wasn’t identified as a coalition member.

No one knew what we were up against, and it was best to be overly cautious than to ride in with guns blazing and end up with a target on my back.

It went without saying that the entire shifter community across the globe knew the importance of keeping low profiles. But there had been more and more news reports coming out of Crescent Valley over the last year, and people were taking notice.

The coalition—the shifter police, so to speak—were growing increasingly concerned about the FBI becoming involved. We had our own agents working within the federal organization, but they could only do so much to keep questioning eyes away from suspicious shifter behavior.

And that’s where I came in. My job was to figure out what the hell these wolves were doing and help the coalition put a stop to their recklessness. Usually, the evidence was clear as day, but this time we had no idea who was causing wolves to end up where they shouldn’t be.

Rounding the side of the large brick building, I pulled open the heavy wooden door leading inside. It was a small city with sixty thousand residents. The downtown area was a hub of activity, with shops, restaurants, and a nightclub scene that brought partiers in droves.

It was also the scene of several wolf sightings, and more recently, a wolf being taken to an emergency vet for care, only to vanish in the middle of the night, leaving the alarm blaring. The news reported the wolf had been stolen, but we knew better than that.

The outside video footage at the animal hospital spotted a man running out of the building in nothing but his birthday suit. What they didn’t know was that man was actually a wolf shifter. He’d walked out on his own two legs after healing enough from injuries that were said to most likely be from a ‘dog’ fight.

The door of the nightclub opened up into a reception area of sorts that was all shiny black surfaces. The only thing in the room was a tall counter with crimson tile inlays that made it look like dripping blood.

Not ominous at all.

I could feel eyes on me from all directions. Looking around the room for a call button or bell, I took notice of the security cameras in the corners, hidden by the light fixtures.

The vibe the room was throwing off didn’t match the atmosphere I’d seen driving into town. But maybe that was the appeal of such a place; it was different enough to bring people from surrounding areas.

A nondescript panel in the wall to the right of the counter slid open and a woman in a very tight low-cut dress walked out. Her hair fell in glossy black waves that made me want to ask what products she used because, damn, it was gorgeous.

Her eyes stared at my flame red hair and traveled down my body. Her gaze was assessing, like an art dealer might look at a painting before deciding to buy it. Judging by the smile that tugged at the corners of her pouty red lips, she seemed to be pleased by my tight green skirt and top that showed just a hint of skin between them.

“Right this way.” She gestured toward the doorway, and I entered the club.

I’d seen pictures of the inside online, but they didn’t do the club justice. It wasn’t just how it looked, but how it made me feel; like I wanted to let all my inhibitions go.

The floor was the same glossy stone the entrance had been. A few chandeliers were on, and the glow they cast on the floor made it appear as if it were blood. The high coffered ceiling had chandeliers strategically placed to light the perimeter of the room where the crimson red seating was. There were two upper terraces on either side of the club that had three seating areas each and were separated by walls.

I had a hard time keeping my mouth from gaping open as the woman led me across the dark dance floor to the bar that spanned the entire back wall of the club. The liquor was displayed from the counter all the way to the ceiling, with a black sliding ladder running along its length.

“If you’ll have a seat, Mr. Wells will be with you momentarily.” She pulled out a barstool for me, and I climbed onto it.

“What was your name?” I had been surprised she didn’t introduce herself to me in the first place, but she did have a don’t fuck with me aura about her.

“Harlow.” She walked back the way we came, her heels clicking rhythmically across the dance floor. She disappeared behind another panel in the wall.

Whoever had designed the hidden panels was a genius because I had a difficult time spotting them along the patterned walls. To a human, the small push button to open the doors would look no different from the wall.

But I wasn’t human.

One of the doors opened, and I feigned surprise that there had been a door hidden in the wall. What I was surprised by was the man who strode toward me with so much big dick energy that I forgot for a moment that I had a job to do.

He was dressed in all black with the sleeves of his button-up shirt rolled to the elbows. His dark brown hair was short but styled with something to make it not move an inch, and his beard was shaved short with clean edges. But his most discernible feature was his eyes; they held a darkness that sent a wave of excitement down my spine.

The last thing I needed was to lust after the man I was digging for information on.

I slid off the barstool as he drew closer and put out my hand. “Wren Carter. Thank you for giving me this-“

“I don’t have time for pleasantries, Ms. Carter.” He bypassed my hand and sat on my vacated stool.