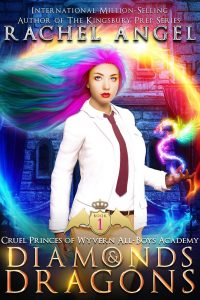 Call me Allotrope…Ally for short. When I received a royal decree from Queen Jade of the Emerald Realms to attend school at Wyvern School for Boys, I thought it was a prank pulled by my friend William who apprentices with me at the Blacksmith. There was no way I could attend such an elite school just for kings-to-be.

But it was a Royal Decree, and if I don’t obey the Decree, there was a threat of death to me and to all I hold dear, which probably means William and his parents, Bilbo and Kate, the blacksmith and his wife, the alchemist, whom had let me stayed with them since I became an orphan.

To keep them safe. To keep me from losing my head, I packed up what little belongings I had and enrolled at Wyvern School for Boys.

Everything at Wyvern School for Boys was meant to intimidate. Being the only girl at a school of incredibly handsome boys, especially the Four Princes, was intimidating.

Not to mention the cutthroat competition that literally cuts students from the school.

I’m stuck in a hard place…either get killed by defying the Royal Decree and also get everyone I cared for, killed. Or stick it out at Wyvern School for Boys, despite all the bullying and cutthroat games Wyvern has in store for me.

Of course, there is no choice…I must survive Wyvern School for Boys, or die trying.

Did I mention this is a school for Dragons, too? I just have to watch out for the fire.