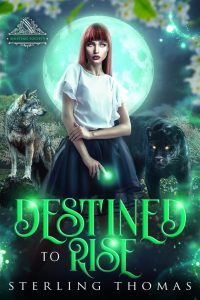 The fate of the world rests on my shoulders.

Ok, that might be a tad dramatic, but I am leading a team of geneticists tasked with solving the vampire problem that’s plagued the world for two hundred years. Oh, and I have to find a way to give the turned their humanity back. No pressure, right?

When my hot billionaire boss demands results after yet another vampire attack, I join his next nest-extermination operation to bag a live vampire test subject.

I’d planned on coming back with a blood-thirsty new coworker, but I wasn’t expecting the Fates to throw a couple of shifters in my path, too. Here I am worried about the body count the vampires are leaving in their wake, but the Fates seem more interested in mine. Add in the attention I’m getting from my boss, and I’m stuck in the middle of a love pentagram.

The pressure’s mounting, bodies are piling up, everyone’s counting on me to crack the mysteries locked in the blood of the turned wide open, and my magic’s going haywire.

What could possibly go wrong?

“How do I break you out of that bloodlust?” I whisper the words, more to myself than the sleeping vampire, but he stirs at the sound of my voice.

Red-rimmed eyes flutter open, landing immediately on me. It’s unnerving, the way he seemed to know exactly where I was, even in sleep. I expect him to snarl, rush the cell doors and try to reach for me. But he doesn’t. Instead, he just fixes those eerily deep eyes on my face and studies me the way I’m studying him.

“I wish I knew your name.” I don’t know what makes me say it, but I suddenly feel guilty for calling this man Fang. Like he’s nothing more than a dog I have the right to name.

His eyes flicker with some repressed emotion, but he doesn’t say anything. I don’t think he can.

We’ve heard vampires shriek and cry out, but never until that day with Vice’s unit had I ever heard, or heard of, one speaking. What made her the exception to the rule? And was there something I could do to help him find his voice, too? All of this would be so much easier if I could find a way to communicate with him.

“I think I’m close to something big here. At least, I hope so. If I can find a way to return your humanity to you, maybe you could go home to your family, have a fresh start.” I murmur my hopes to him like it will make a difference — like he’ll understand.

There’s a flash of something in his gaze, his face crumpling for a moment before smoothing back out in that neutral stare.

My heart begins to hammer against the bonds of my ribcage, my voice coming out in a whisper. “Do you have a family to go back to?”

This time I’m looking for his reaction, and it’s unmistakable. There and gone in a moment, but there, all the same. Pain. There’s such pain in his eyes for a single gut-wrenching second that the breath catches in my throat.

“You understand me, don’t you?”

His face is back in that impassive mask, but he slowly raises himself into a sitting position on the small bed. He never breaks eye contact.

Of course, he doesn’t respond, but he doesn’t need to. I’ve seen the flicker of humanity deep inside of him, no matter how weak the spark. That means there’s a chance.

“I’ve never seen one so docile before.”

I let out a shriek, almost jumping out of my skin when a deep, masculine voice shatters the bubble I’d existed in as my mind ran through possibilities and scenarios on overdrive.

My outburst snapped the vampire out of his trance, too. In a flash, he’s battering at the cell door, trying to get at my uninvited guest.

Annoyance rises like the tide inside of me, and I turn sharply on the man to my left. “What in the hell are you doing in here? This is a lab, not a petting zoo. Get out!”

Luca comes rushing in the door, eyes wide as he takes in my no-doubt red face as I stare down the smug-looking intruder in my lab. His mouth opens to say something, but the intruder beats him to it.

“I’m well aware that this is a lab, Doctor Mathius. I do sign your checks, after all.”

Well, shit. Once again, I’ve gone and shoved my foot in my mouth in front of Archer Donovan. This time in person. And in two-day-old clothes, nonetheless.