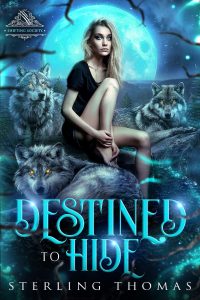 The man I loved is a liar, a predator who lured me in with sweet words and empty promises. Now, I’m trapped and it’s only a matter of time before he loses control.

I have one chance to run. Head for the wilds and don’t look back. If I leave, I might die, but he’ll kill me if I stay.

For so long it’s seemed like I’m destined to spend my days in hiding; scared and alone. But when a freak accident sends a pack of shifters crashing into my path, I catch a glimpse of a life worth living.

Can I find the Love and safety I crave with three men the rest of society considers threats?

And will the monster that hunts me ever let me go?

We’re kinda different for a wolf-shifter pack. We don’t have an alpha the way some do. Partly it’s because there’s only three of us, partly because we grew up together and none of us buy into that bullshit, but it’s also because if one of us were to be the alpha it would be Gage. And he doesn’t want it.

So he’s got that whole alpha male thing going for him that apparently women love, and Dylan is smart as hell. I guess I can make a decent sandwich, but I’m not sure what else I have to offer this beautiful woman, and that fucking destroys me.

So does that way her eyes are becoming glassy. Shit, I don’t know what’s going on in Olivia’s head right now, but I gotta find a way to snap her out of it.

“Did you know that a big cat’s penis faces backwards when not erect?”

Her eyes find mine and her brows rise like I am the biggest dumbass in the history of dumbasses. And she would be right.

“Wh-what?” she chokes out. Literally chokes. I just made my mate choke on a turkey and tomato sandwich by spouting random facts about animal dicks. This is the kind of crap my brothers and I joke about when we see a couple of cat-shifters we know. It pisses them right off and it’s a good laugh. But Olivia probably thinks I am some kind of weird pervert that knows too much about cat dicks, now.

“You looked like you were contemplating the mysteries of the universe, so maybe that will help.”

She cocks her head at me very much the way a shifter does, and I give her a sheepish grin, holding my head in my hands to hide from my overwhelming embarrassment.

“I’m an idiot. You looked like you were stuck in some really unpleasant thoughts and I wanted to make you smile, but of course the one thing that would fly out of my mouth is a random factoid we love to use to give some big cat shifters a hard time…”

“But if you give them a hard time, do their dicks still point backwards?”

I’m speechless, completely taken aback by the sudden twinkle in this enigmatic woman’s eyes, then I’m laughing with my whole body until my sides hurt.