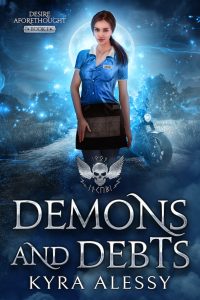 An Autistic waitress being hunted. An Incubi MC who can help. But will their price be more than she can pay?

When I was fourteen, a woman I called mom was murdered … and it was my fault.

I’ve been on the run ever since, but someone’s chasing me. I don’t know who they are or what they want. The only thing I’m sure of is that I need to keep moving or more people will die.

They’re going to find me again. They always do.

The human authorities are useless. The supe cops, even worse. My only hope is the Iron Incubi MC, the biggest, baddest, meanest supes around. I’m sick of running and I’m desperate enough to make a deal even if it costs me everything I have left.

Oh, and I’m Autistic. My condition means my brain works differently. I can keep it together in the day-to-day and mask my quirks when I’m around others for a little while, but now the five human-hating Incubi who I went to for help have me prisoner at their ‘clubhouse’, i.e., mansion in the middle of freaking nowhere.

So, what happens when five hot as sin s€x demons lock up a human girl who sucks at all the bedroom stuff, doesn’t cope well with change, and definitely can’t mask her ASD 24/7?

My name is Jane Mercy and I have no f**king clue, but I don’t think it’s going to go well for those gorgeous-enough-to-be-underwear-model SOBs … especially when my stalkers come for me …

Demons and Debts is the first book in the Desire Aforethought Series of paranormal romance. If you like hot monsters, alphahole bikers, flawed men, strong heroines, and your multiple POV stories with some mystery and drama, tap now!

Read the first dark adventure in this exciting trilogy today!

Hot guy ignores me for long enough that my waiting for him to look up becomes awkward even though he’s not serving anyone. I’m standing right in front of him and he’s intentionally not letting his gaze fall on me.

This is a college town and I’ve gotten used to dealing with pretty boys like him in the diner over the past few months, but as the irritation mounts, I forget my usually crippling social anxiety. I push away the sensations screaming at me to go somewhere dark and quiet and just zone out for a few hours.

‘Excuse me,’ I say lightly, pretending I haven’t even noticed his BS.

He finally looks at me and I’m caught. I’m ensnared by eyes that are the color of molten caramel with little flecks of gold that catch the lights even low as they are. My breathing stutters and I swallow hard. I’ve never felt anything like this.

His knowing smirk is enough to shake me out of my embarrassing reaction and I frown at him. What was that? What is he?

The realization hits me, and I take a step back, my nostrils flaring on a gasp I try to keep under wraps.

I should have known he was one of them even though I’ve never actually met one of his kind before. In general, the supes move in very different circles from humans, but I know they hang out in this bar. That’s why I’m here.

‘You break down or something?’ he asks in a lazy drawl as if I’m taking up his valuable time.

But something in his eyes makes me think that, like the rest of his appearance, this is a show he’s putting on. There’s something about me that’s intrigued him, and I don’t like it. The last thing I need is his full attention.

‘I’m looking for the Iron Incubi.’

He barks out a loud laugh and I can’t hide my wince. What if their gatekeeper won’t even let me talk to them? What’s my plan if I can’t get their help?

Leave, a helpful voice inside my head supplies. Get on the first bus out of town before bad things start to happen here too.

But I can’t do that. I need this all to stop. I’m so tired. I just want to live my life. I don’t want to go to a new town, live on the streets for the first few months, get some shitty job that doesn’t ask questions so I can beg my way into some hellhole apartment on the worst street. And then do it all again in a few months just like I always have to do when they track me down. They always find me. The thought of it makes me want to curl up and cry.

But I don’t. I’m here so this can finally be over.

Hot Guy doesn’t say anything, his gaze roaming over me, and I get the feeling I’ve somehow baffled him and he’s trying hard to figure me out.

Who knows, maybe he’s the kind of guy it’s really easy to confuse. Even a hot incubus can’t have looks and brains, right?

He gestures with his chin to the darker area where the booths are.

‘They’re in the back by the pool table,’ he says.

I incline my head in thanks, grateful he’s not throwing me straight out on my ass.

I walk through the smoke that’s heavier back here, trying not to cough. I can make out murmured talking and the feminine giggles I heard from outside.

Grinding to a sudden halt, I have third thoughts at the juncture where the floor changes from old wooden boards to an industrial carpet; the kind with brown toned patterns to hide the dirt. It doesn’t work here. I sort of don’t want to touch anything.

If I go past this line, there’s no turning back. Forcing myself to raise my eyes, I’m taken aback by the men in front of me even though I should have expected this level of good-looking.

There are more hot AF men back here. Two of them stand at the wall like sentries, one’s by the pool table in the middle of a game and the other two are sitting in a lone booth with the woman whose laugh I could hear before, I realize belatedly.

‘What the fuck is this?’ one of them asks, putting a little snort at the end.