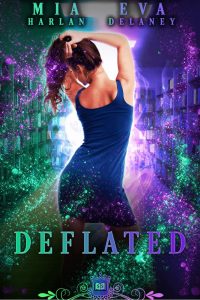 I’m desperate to pop my cherry. My fated mates are just as desperate to claim me. But my wonky magic makes it impossible to do “it” even after being together for a whole year!

If we don’t reverse the spell by midnight, the town’s *ahem* bananas will stay deflated forever. I’ll be stuck with my v-card, and no one in the town will ride a man’s *ahem* broomstick ever again.

“I’ll never lose my virginity,” I wail and bury my face in my hands.

I’ll never have sex with my mates. I’ll never know what it feels like to have my inner muscles clench around their cocks. I’ll never even give one of them a blow job.

“Yes, you will, Vi.” Nole’s honey-brown eyes meet mine. “We’ll figure this out.”

“No, we won’t!” We’ve been together for a year and we haven’t managed to have sex because… well…

My bear shifter mate pulls me against his chest, and it happens.

For the millionth time.

Into a little old lady. My namesake. Violet, whose body feels young and spry now that her mates have turned her into a vampire.

“Shit,” Nole growls, letting go of me. He runs his fingers through his long sun-bleached hair, and his furrowed eyebrows reflect my inner frustration.

“It’ll work this time.” My other mate, Cash, straightens his suit. Then the vampire-mage hybrid turns his piercing black eyes on my third and final mate. “Liam?”

I can tell the two of them are up to something. Whatever it is, I’m all for it. We’ve tried hundreds of things over the past year to keep me from shifting whenever things get heated. And while a part of me knows not to get my hopes up, another part can’t help feeling excited at the prospect. And turned on. Really turned on.

Bam! I start to cycle-shift.

I’m about to ask what my guys have planned when Liam—my big, ferocious troll—lets out an outraged growl. His eyes zero in on me, and he scowls. “Quit shifting into my gran and let me fuck you!”

“Don’t you think I’m trying?” I wail. In his gran’s voice. Just shoot me now.

“Try harder,” Liam snaps. His eyes blaze, his frown is filled with menace, and his eyes glint with murderous rage. Not to mention he’s seven feet tall, broad-shouldered, and built like a tree.

Anyone else would be terrified. Me? Mostly just hurt.

Tears prickle my eyes. It’s not my fault I keep shifting like this. It just happens. Every time I get turned on, I lose control. If I could stop it, I would.

“Told you it would work,” Cash—who can’t see my face—says. He wraps his arms around me from behind. His lips graze my neck and bam!

A wool-coated, four-legged llama. Not that there’s any other kind.

I make a gurgling noise as Cash loses his balance, trips over my back, and faceplants at my feet. Erm, paws? Or maybe hooves? My librarian brain wants to know what they’re called. How am I ever going to lose my virginity if this is the sort of stuff I think about when I’m alone with my guys?