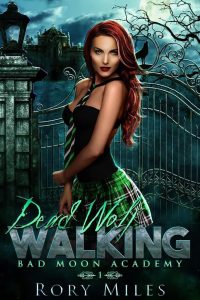 One bite changed my life.

I was living life to the fullest when a wolf attacked.

Now I’ve been ripped from my home and shipped off to Bad Moon Academy, a place for changed wolves. Or so I’m told.

There’s something sinister lurking within the confines of the academy, and I’m starting to think I was brought here as a sacrifice

I glare at him while he struts over in his dark jeans, black leather boots, and a loose-fitting V-neck. He really shouldn’t be so attractive. Why are the worst ones always the hottest?

His skin is warm against mine, and he peels my hand from the bar without issue. “You’re covered in blood.”

“What the hell was that?” I ask as he lifts my hand to get a closer look.

His grip is firm and I can’t pull away. “Pack magic prevents unauthorized people from leaving. You haven’t been granted permission to leave.”

He runs a finger over one of the cuts on my palm. I hiss.

He hums and sniffs my palm. “This won’t do.”

Slipping his tongue past his lips, he licks my hand.

“Hey, gross. Don’t.” I try to yank away again, but his hold tightens.

Lifting his gaze to meet mine, he hovers his mouth above my skin. “Would you rather the vampires smell your blood and come for you?”

Vampires? I wrinkle my nose and press my eyebrows together.

“Then let me finish.” Strands of dark hair fall across his forehead, and I fight the urge to brush them away from his eyes.

Am I really going to give him permission to lick me?

Do I really want to be eaten by vampires? Absolutely not.

He smiles and tsks. “You can’t rush perfection, Little Red.”

I press my lips together and watch him lick my wounds clean. He slowly rolls his tongue over the cuts. Once the blood is gone from those, he slips my index finger inside his mouth and sucks on it. My knees knock together, heat flaring low in my belly. With a gasp, I place my hand on his shoulder to stay upright. He chuckles, and the sound vibrates against my finger as he drags his mouth to the end of it and moves to my middle one.

“It’s not what it looks like,” I say over my shoulder. He’s storming toward us and looks ready to knock Draco out. “The gate cut me, and he’s getting rid of the blood before the vampires— “

“Vampires?” Carter scoffs. “Moons, Draco, is that what you told her?”

The man in question swirls his tongue over my bloodied finger and places a chaste kiss at the tip before releasing my wrist, standing, and smirking at Carter. “I was helping.”

Carter crosses his arms over his chest. “Fucking hell. What is your problem?”

I stare at the blood covering my forearm. “There are no vampires here, are there?”