Curse of the Gods 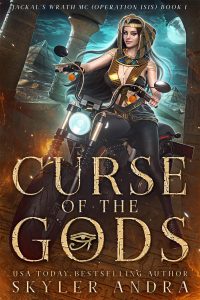 After the death of my boyfriend, I’ve spent seven years hiding from bikers and atoning for my sins. Until my brother orders me to infiltrate our rival club and avenge our father’s death.

Destroying my enemies from within won’t be the hard part. Hiding my identity will be.

The Jackals are just like me, shifters with the power of Egyptian gods, and with Set, Osiris, Horus, and Thoth whispering in their ears, it won’t be long until they discover my secret.

Until a cruel and sick twist of fate changes everything.

The gods are cursed, and we as their servants, are bound as mates. Fucking fated mates. I’d rather die than lie with a Jackal.

Hearts won’t be the only thing I’m breaking when my enemies declare me theirs.

Curse of the Gods is book 1 in the Jackals Wrath MC series (Operation Isis) featuring a stubborn, yet strong heroine and four badass, haunted bikers with a touch of sweetness.

Of all the hospitals in the city the president of Jackal’s Wrath MC had to walk into, he had to walk into mine. Northshore Hospital. Reclining on the gurney, Slade Vincent had lost a lot of blood and needed immediate attention. Why was he here when clubs had their own medics and doctors on their payroll?

My heart pounded in my chest, frightened that he’d recognize me and shoot me in the head. I hadn’t had any involvement with my father’s club for over seven years. Rival clubs always knew the family of their competitors.

I swallowed hard at the words plugged in my throat. Murderer. Bastard. I will slay you for killing my father. I couldn’t treat this man.

Shit. I couldn’t leave him there either. Five years ago, I’d sworn the Hippocratic oath to protect my patients and serve them no harm. All of my training, every oath I took, was about to be put to the test.

My voice came out neutral and calm as it had done with every other patient. “Can you remove your shirt Mr. Vincent, or do you need me to cut it off?”

My hands trembled as I filled a stainless-steel roller tray with gauze, alcohol, and steri-strips. Thoughts of ending his life shot bolts of adrenaline through me. Sweat broke out on my forehead at him seeing through my fake name badge and discovering my identity. Oh, and maybe a little cause he was packing a gorgeous body beneath his shirt and leathers.

“If I knew the nurses here were as beautiful as you, Nurse. A,” Slade rasped, “I wouldn’t have waited so long to step inside a hospital.”

Lame attempt at flirting. Heard it a thousand times before. Definitely not falling for it, certainly not from him. He wouldn’t find me so attractive if he knew who I was.

For the first time since inheriting my healing power, I contemplated not using it, letting my brother have his revenge.

Shit. You can do this, Aaliyah. You have to.

Slade grimaced as he set the blood soaked wadded up tee-shirt on the gurney and peeled off his own. “You’ve got more curves than a mile of mountain road, Nurse. A.” He swung his legs up onto the gurney and stretched out.

I bit back the urge to tell him to shove it. Keep it professional, Aaliyah.

“Just as deadly if you aren’t careful.” I aimed for a politely veiled threat, removing a scalpel and setting it in the tray at my disposal. Safety precaution in case he pulled a gun on me.

Damn Slade mistook the warning for an open invitation to keep flirting.

“Bet you’re fun to ride… with.” Innuendo central, here. He laced his fingers together and placed them behind his head. That must have hurt like hell. Hoped it did for what he did to my father.

“Are you sure you didn’t injure your head? You’re babbling incoherently. I recommend an MRI. Just to be safe.” After grabbing a wound flush kit, I stopped to make a note about a scan on the computer.

Slade smiled at my attempt to shut him up. He did whatever he wanted, when he wanted. “Scan me all you like, Nurse A.”

Snap out of it, Aaliyah!

Either he had no clue who I was, or he toyed with me. My bets were on the latter.

“Scrubs are a hot look for you. I especially like the owls.” Slade reached for the stethoscope wrapped around my neck, and my breath hitched having him so close. “Listen to my heartbeat. It’s going boom, boom, boom.”

So was my heart, and not just out of fear. He made my heartbeat erratic from the crazy spark that went off when he leaned into me.

“Mr. Vincent, I’m not worried about your heartbeat or your pulse.” I removed the squeeze bottle from the sterile packaging and set it on the tray.

Come to think of it, a lack of pulse might be an improvement. Even an experienced nurse questioned their oath and themselves when known violent criminals came in for treatment. Gods knew how badly I wanted to let him bleed out. Except Slade Vincent wasn’t worth the paperwork involved when a patient died.

“This may sting.” I cleaned the excess blood and dirt from his side and tossed the used wipes into the hazard waste bin.

Slade’s almond complexion paled, to a ghostly white, when I slipped two fingers into the puncture. A hot spark shot through me when I touched him, and I had to bite back the moan of sweet pleasure drifting within me. Sweet pleasure that I touched him or hurt him?

Fuck, Aaliyah. He’s a murderer. What the fuck is wrong with you?

Lightheaded and confused, I was tempted to pull out, call another nurse to tend to him. I pushed on, eager to get rid of him as soon as possible.

“Are you experiencing any tightness in your chest or difficulty breathing, Mr. Vincent?” I panted. Panted for god’s sake! Shit, I had to keep it together.

The cut was deeper than I expected, and he had blood in the pleural space, his lung on the verge of collapse. I had to get a doctor down here to get him into surgery stat.

I carefully removed my finger. “They nicked your lungs.”

Sweat beaded along his brow. “I’m a first name during penetration kind of guy. You can call me Slade and I never said someone did this to me.”

“I’m already wounded, Nurse. A. There’s no need to break my heart too.” Slade managed a wink and flirty smile combo that would knock a normal woman off their feet. Pity I wasn’t normal. I had immunity to arrogant, cocky men like him. No amount of mystery, muscle or well-defined jaw would make me forget what he did or was capable of doing.