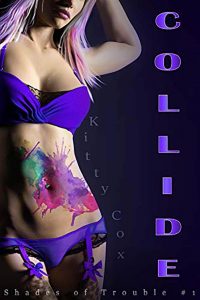 Destiny is what happens when dreams collide with reality.

I’ve made a name for myself as a world famous lingerie model. I’m rich and powerful now. Not too bad for a girl from small town Texas. All I really wanted was to become so beautiful that Luke, my teenage crush, would fall at my feet.

But thirteen years is a long time.

Long enough for this little girl to grow up and glue back together the pieces that were chipped away as a child. Plenty of time for me to figure out that love isn’t made of fairy tales and high school crushes who didn’t even know I existed. Maybe it’s even long enough for me to realize what’s staring at me through my best friend’s eyes – even as I try to say we’re just business partners.

Then Gran dies. Now I have to go back to that same small town that destroyed me.

I keep telling myself I’ve got this – right up until Luke shows up in my life again. This time, he’s noticed me, but he comes with a troubled daughter that reminds me a little too much of myself. Then there’s the new guy I just hired. He’s the best person for the job, even if he is my best friend’s ex – and looking at my crush a little too hard.

I’m supposed to be taking over Gran’s business, but the rumors are flying. This town hates me. My neighbor wants to see me fail, my love life is out of control, and Luke’s daughter? It looks like she’s going to be the only one who ends up hurt unless something changes. What good is success if I can’t use it to help anyone else?

I came home to save something.
I just had no idea it was more than just a house.

“Get the hell off me,” I growled, turning around to face him.

“Or what?” Ashton asked.  “You gonna go all caveman and try to defend her honor or something?”

The jerk had officially gone too far.  Violet’s honor wasn’t some joke, and it certainly wasn’t up for debate.  I didn’t think, I just pushed.  The problem was that Ashton pushed back.

“Someone should,” I growled, getting right back into the man’s face.  “Did it ever occur to you to consider how she might feel about this, or are you just here to get your rocks off?  She’s not here to be some ornament for you to show off!”

Ashton didn’t back down.  “Looks to me like you had no problem looking, either, cowboy.  Or did you just want me to go away so you can start the touching?  Because I’m not about to vanish any time soon.”  He reached up and pushed my shoulder once more.

That was more than I could take.  Pissed at how this guy treated her, angry that I’d stumbled into the middle of it, and livid that I’d successfully lost any chance of impressing this woman, all of my rage came together at the end of my fist.  I jabbed upwards, connecting solidly with Ashton’s stomach.  Unfortunately, the pretty boy wasn’t as soft as I’d hoped.

Air whooshed out of Ashton’s lungs, but he came back with a vengeance – and without hesitation.  I got a knee in my gut for the trouble, then an elbow jammed down on my shoulder, but I managed to duck back before the fist touched my face.  That was it.  This was on.

Seething and snarling like a pair of rabid dogs, we began pounding each other.  Behind us, Violet yelled.  She screamed.  She tried everything she could to get our attention, but hormones had taken the place of both our brains.  I wouldn’t let this idiot get away with what he’d done.

Ashton got in a solid hit, then I managed to get in a resounding punch.  He charged, shoving his shoulder into my gut just to drop both of us to the ground.  I rolled, throwing another punch at the jerk, but the bastard just wouldn’t stop.

Then a hard stream of water came out of nowhere.  I got hit in the face, Ashton in the ass, and Violet just kept soaking.  In seconds, the water turned from warm to ice cold, and neither of us could ignore it.  We gasped, sputtered, and tried to keep her from hitting us right in the face.  She kept on spraying until we pushed away from the stream, effectively separating ourselves.  Then she finally let go of the handle, proving she’d pulled the water hose over to use as a weapon, and she wielded it with power.

“I am only going to say this once,” she told us, standing there in her bra and panties proudly, looking at my face and then Ashton’s.  “If you two want to fight?”  One perfectly painted nail stabbed in the opposite direction, right toward the gate to the property.  “That is the way out.  If either of you think about doing it again, you will never be welcome back here.  Do you two understand?”