Call of the Wolf 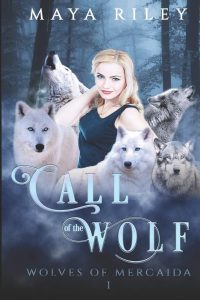 Those words change my entire life, going from ordinary to unbelievably wild. Suddenly, I don’t know who I am anymore.

It isn’t until five guys stroll into town who know more about me than they initially let on, that strange occurrences begin to happen. Attacks become more frequent, and simply surviving has never been so much of a challenge. Even more so, they claim me as their own and refuse to let me out of sight. Everywhere I turn, they’re there.

Watching me.
Guiding me.
Protecting me.

They open my eyes to a world of shifters and turmoil and now that I know the truth, I don’t know if I could ever go back.

My wolf is calling, but will I answer?

“Seriously? Climbing a tree is much faster?”

Despite how dark his eyes were, they still seemed to glow in the shadows even as he narrowed his gaze at me. “Would you have answered the door?”

My mouth fell agape as I tried to figure out how to respond. He wasn’t wrong.

Straightening his posture, he was the epitome of business as he took advantage of my hesitation. “Exactly. Now, we have some things to talk about.”

An awkward laugh bubbled out of me. “You’re kidding, right? You can’t climb a tree, break into my bedroom, and expect me to do what you want. It doesn’t work like that.” Deflection. That would work right now. Anything to give me some more time to organize my headspace.

“We’ve already wasted enough time. We tried to give you some space to figure it out for yourself since we didn’t want to scare you away. That was what we were most afraid of, but it seems to have been unavoidable anyway. As you can see from that video there”—he nodded toward the computer—“you now have confirmation you’re a wolf.”

“What are you?” My fingers curled around the arms of my chair, bracing myself for the answer I’d already known.

“I’m a wolf as well. As are Liam—who is the beta, the next in command—Julian, Casen, and then Axel, the omega.”

“What does that make you?”

His boots tracked dirt on my carpet as he walked over to me with a slowness not unlike a villain’s in a horror movie, and it made me consider running. I stole a glance at my door, wondering if I could make it.

“Bolting won’t work.” He leaned his head in, and his dark eyes swirled as they locked on mine. They carried a seriousness I could feel in my bones, wrapped up with a softness as they explored my own widening irises. “I’m the alpha.”