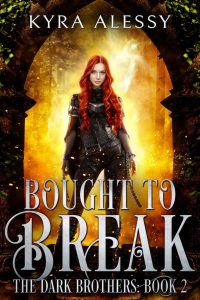 A woman freed from chains. Three ruthless mercenaries seeking revenge. Intense attraction that won’t be denied … whatever the price.

Lana’s days are filled with backbreaking work and her nights are spent hiding from her master’s son, but, when dangerous mercenaries pass through her village, her life is changed forever…

She’s thrust into an outside world she’s only ever dreamed of.These warriors are unlike any men she has ever known. Driven by desperate vengeance, they’ve been broken by the tragedies of their pasts. Viktor is gruff and hard, Sorin, quick-witted and funny, and brooding Kane wields a power that terrifies her. Each hides sadness that rivals her own and Lana is drawn to them as well as their dangerous desires.

When a formidable enemy threatens them, can her bond with the three mercenaries save them all? Can she help them find the humanity they’ve lost, but more importantly, will they want her to?

Finishing her duties, she was about to curl up under the straw in the corner to sleep when she heard movement outside. Fearing it was Ather coming back, she leapt for her hiding place, but the door swung open before she had taken two steps, taking her by surprise.

Two monstrously large men trudged in, leading two of the biggest ink-black stallions she’d ever seen. Both men and horses looked like they’d been out in the wilds for a good long while. They were all hardened and worn, dusty and rugged. The men wore dark clothes and had thick black cloaks for the season. Both had dark hair and eyes, and their handsome faces alone were enough to guarantee neither of them would want for female company while they stayed at the inn.

At that thought, Lana blushed and hoped her face was still dirty enough to hide it. Their great horses stomped impatiently with their enormous hooves, their breath coming out of their nostrils like smoke in the winter air. It made them look like beasts from a dark realm and she imagined these men were just as wild as their mounts. She shook slightly. Village lads and farmers were one thing, but the last time men like these were in her village, they had simply taken anything they wanted; food, supplies – and more than one woman was now growing with a child that was not her husband’s. Lana still had bad dreams about the raids though she had hidden herself well each time they had come and they hadn’t been back since the end of the summer. The local lords had run them off, she’d heard.

Lana continued to survey them. No, she wasn’t used to men like these. They must be warriors of some sort though. Yes, that was right. She had heard talk earlier in the day from travelers who had come via the north road. Mercenaries had been seen journeying south to the ports, travelling to where their services would be best paid for. These men were part of that sell-sword army, the feared Dark Brothers. She must have made a sound, because she was suddenly the focus of their piercing gazes.

‘Where is the master here?’ one of them ground out.

She opened her mouth, but, to her mortification, no sound but a tiny squeak passed her lips. The one who had spoken looked impatiently at her and the other, amusedly.

Viktor smiled slightly. He was enjoying her discomfort, and her eyes narrowed at him.

‘I am not frightened!’ she sneered.

Viktor’s grin widened. ‘Are you sure of that?’

He took a step towards her and she took two back.

‘You look terrified to me. Tell me where your master is before I become impatient.’

He was playing games with her. Ather did that as well, but whereas Ather’s games always ended in her receiving a sound beating, these men had no reason to harm her. They had no reason to even think of her, so far was she beneath their notice, she mused.

She looked Viktor in the eye and stood up straight. ‘The sun is almost down. He’s no doubt asleep.’

A look was shared between the two men. ‘Bit early in the day to be abed.’

‘He’s a drunkard,’ she said simply. ‘But he never comes to the stables anyway. If you want your horses taken in, there’s room in the last two stalls for the night. A silver. Each. They’ll be well tended. You have my word.’

‘You’ll see to them yourself, girl?’ the other man asked, looking her over, somewhat oddly.

Unable to help herself, she barked a small laugh. ‘Do you see anyone else, sell-sword?’

They both raised their brows in surprise. Perhaps they weren’t usually spoken to like that by slave girls.

The one not called Viktor produced the coins and held them out to her while the other simply watched the exchange. She edged forward, afraid one of them was going to grab her as such things had begun to happen with alarming frequency over the past months. But they both stayed still, as if afraid she’d flee if they pushed her.

She took the coins gingerly from his open hand and looked him in the eye while she did so. She was no quaking waif. She’d have been the richest girl in the valley if her mother hadn’t died. He looked like he was trying to suppress a grin, and she had to stop herself from rolling her eyes at him. She’d been punished for less in the past.