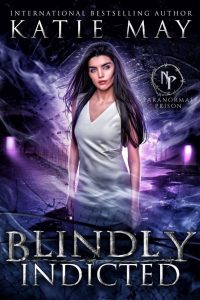 I lived my life as a prisoner.

I’ve always been told stories about the real world, but I haven’t seen it for myself. All I have ever known is pain.

They tell me I have been blind since birth.

When I make my escape, I think freedom is finally within my grasp…

Until I’m captured by the paranormal police for a murder I didn’t commit. Apparently, I have powers—powers I have always suspected myself of having.

Thrust into Nightmare Penitentiary, I meet a group of hard, alpha, psychotic inmates who believe I’m the answer to all their prayers. Me? I’m just trying to survive and figure out what it means to live. My new home isn’t just a prison, but a labyrinth with horrors around every corner.

But what if the cost of my life is my freedom? Am I willing to trade one cage for another?

Welcome to Nightmare Penitentiary where you come in handcuffs and leave in a body bag.

Hanging from the rafters in the “king’s” throne room is exactly how I thought my day would end. Add on to that the brutal beating his mage pet is inflicting…

My eyes latch on to the silver ring on Blade’s finger as another punch connects with my face, ripping my precious lip ring out.

I have been betrayed by the shiny.

“Now, now, boys, that’s not very nice,” I gasp as blood forms in my mouth.

“Cut the shit, Rion,” Blade growls. Honest-to-fuck growls. A little dramatic, if you ask me, but I’m not one to…

“What were you doing with Nina?” Mage Bitch asks coldly. I don’t think that’s his real name—pretty sure it starts with a B or D—but us shifters always refer to him as Mage Bitch or Blade’s Bitch. Both nicknames work.

Mage Bitch is a scary fucker with cold eyes and an even colder smile. The man’s colder than an icicle. I’m pretty sure his balls are cold too…you know, blue balls.

Speaking of icicles, I’m rather parched. Hanging from the rafters while being tortured does that to a man. Perhaps if I ask nicely, they’ll humor me with a glass of water?

It’s sort of ironic that they would hang me from the ceiling considering that’s how I stalked Nina the majority of my time here. Technically, I wouldn’t consider my actions “stalking.” It sounds much darker than what it actually was. I much prefer “watching someone without their knowledge or permission.” It’s all about the words.

Damn. I’m a poet. I should really consider a career as an author—

Mage Bitch places his dagger against my throat. “Start talking,” he hisses darkly. “Isn’t it obvious?” I blow at a piece of hair that has gotten stuck to my blood-soaked mouth. “I’m her mate.”