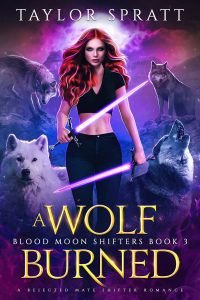 Darkness has come to Dominion but is Amira truly to blame?

Accused by the Queen of Dominion of bringing Darkness to the world, Amira and her men must go on a quest to destroy three unholy objects in order to stop the darkness before it fully engulfs the world. Along the way danger abounds as these unholy objects are more dangerous than they seem, possessing dark magics powerful enough to kill anyone who dare come looking for them.

Like Amira didn’t have enough on her hands, Ragnaron has joined their quest, sparking fierce conflict and competition with the Blood Moon Alphas as every wolf wants Amira for himself.

Alpha Logan has far from given up his plans of reclaiming Amira as his. And as usual, he’s not averse to using dirty tricks to do it.

Can Amira and the gang destroy the unholy objects before darkness swallows the world whole? Can Ragnaron and the Blood Moon Alphas finally make peace so they can live happily with Amira instead of competing over her? Or will Alpha Logan reclaim Amira, dooming her to a life without the men she has come to hold dear?

“There’s no need to keep your distance from me, mate. I want us to be so much closer than that.” His lust filled eyes fell to the valley between my breasts and was that a drip of drool I saw forming on his lip?

“Um, you do realize I’m the same girl you just publicly shunned and damned to prison, right?”

“Don’t be sore. That was just for show. If my wolf had his way I would strip you naked and take you right here and now. Isn’t that exciting for a she-wolf like you? The power you now hold over your Alpha?”

“A she-wolf like me?” I drew away from him, still remaining on the bed, but barely. “You mean low born? An outcast? And since when did it matter to you that I am your mate? You love Nelenia, don’t you? So why don’t you run off to her and leave me the hell alone.” I jerked my head in the opposite direction and he gripped my chin, pulling my face back toward him.

“Because you are mine and I’m not going anywhere until I wish it, you got that?” He leaned in closer till his scent raced through my nostrils. He grabbed a fistful of my hair and rubbed it on his nose as he took a deep blissful inhale.

“Mine, all mine,” he whispered while bathing his face in my hair.

“Now you smell me.” He pulled my face in to rest against the firmness of his muscles laden chest and Wolfy went berserk with joy. If I could see her right now she’d be dancing.

He smelled of cinnamon and sweet cherries. As much as I hated to admit it, my body burned to touch his. Everything about him was irresistible to me now. Was this the power of the mate bond?

No, he’d treated me too badly for me to just forget that. I was nobody’s beating stick.

“Maybe I didn’t make myself clear.” I tore myself away from him and looked him dead in the eye. “You can’t just humiliate me in front of the whole pack and then claim me as yours. It doesn’t work that way.”

“Do you know how hard just being near to you makes me?” He glanced down at his own bulging member. “I’ve never been so excited and now you want me to leave you alone?” He laughed, gripping his sides,  and closing his eyes from how hard he laughed.

“Do I look like I’m joking? I’ve had it with being pushed around, bullied, and disrespected. Now either you let me go free or there’s the door.” I rose to my feet and whipped my index finger toward the closed door.

He gave a nonchalant glimpse at the door before giving an unperturbed sigh.

“Come on, what are you being so mad for? I had to save face in front of the pack. I’m the Alpha, people expect things from me.

“Now, just be nice and you will be well rewarded. Come and sit with me.” He spread his legs wide and waved his hand over his long legs, gesturing for me to sit in his lap.

Wait a minute. A light bulb went off in my head. The Alpha was one of the few shifters allowed to roam the outside world. He vacationed up there a few times a year. If I was by his side, maybe I could go up there with him one day soon and make a break for it.