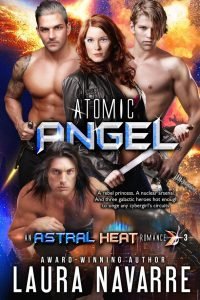 In a race through space against five hundred sexed-up suitors, a galactic marriage contest is nearing its climax. Rebel princess Kaia defies centuries of tradition to choose not one match, but three to bring peace to her war-torn galaxy. Together, the space pirates’ hellraising head honcho, the ice-cold imperial enforcer who stalks him, and the galaxy’s most lethal telepath will rule at her side—and consummate their blazing passion in her bed. But Kaia’s tyrannical father, worshipped as a god by billions, views her unconventional choice as the ultimate betrayal.

In a universe where adversaries pretend to be allies and enemies turn into lovers, Kaia must defeat a cunning rival with a nuclear arsenal primed and pointed at her homeworld and enough atomic firepower to incinerate the galaxy she’s sworn to protect. Will the fragile trust growing between Kaia, Dex, Zorin, and Nero prove strong enough to avert the ultimate apocalypse? Will their risky alliance expose the secret truth to defeat her vengeful father? Or will he command his faithful fanatics to obliterate Kaia and all three of the men she loves?

If Zorin’s living room was a Mogadon reactor, the core was about to go critical.

Kaia stood riveted just inside the door like her boots were bolted to the floor. With Dex at her back, hands hard and possessive at her waist, breath harsh with craving in her ear. Watching one of her five favorite fantasies play out in real life.

The one where Ben focused all that formidable sex appeal and seductive skill he’d honed over a decade as the breeding program’s stud pony on making Zorin lose his steady-eddie composure and unchaining the ruthless, tenderly violent savage that lurked just beneath her space pirate’s easygoing exterior.

And Ben had definitely done it.

All tattoos and leather stretched over a mouthwatering expanse of muscle, Zorin pivoted from where he’d trapped Ben in the corner to confront them, massive chest heaving with effort, rugged face ruthless with arousal, lidded eyes burning with intent.

“About time you two turned up.” He dragged a rough hand through his hair. “We were, uh, waiting for you. At least, one of us was waiting.”

He slanted Ben a look that smoked with wrathful purpose—-the silent promise that he fully intended to give Ben Nero everything he’d just been begging for.

Kaia’s lifemate took his time smoothing back his raven hair and disentangling himself gracefully from Zorin’s looming body. Looking sullen and debauched as a rock star, all gorgeously disheveled and barefoot, erection shoving against skin-tight black breeches. Not at all daunted by the pirate’s hard hand still gripping his shoulder.

Pinning him to the wall like a sand wolf claiming captured prey.

Claiming him every way he could.

An aura of sexual aggression, charged with relentless intent, crackled in the air between her two lovers.

“We’re fully aware you were waiting.” Humor and arousal mingled with irritation in Dex’s voice. His arms tightened around Kaia, easing her cybersuited derrière against his fully erect cock. “You were…I believe you’d call it…projecting? I’ve, ah, been listening in since halfway over on the shuttle.”

“Aw, shoot.” Clearly chagrined, Zorin scrubbed a hand over the back of his neck. “Sorry, kid. All this mind-reading mumbo-jumbo’s still pretty new to me.”

“He didn’t mind,” Kaia murmured. “And give yourself some credit. When it comes to telepathy, big guy, you’re a damn quick study. Ben wasn’t making it easy for you either, was he?”

Fighting to contain a smile while her pirate was still so obviously worried over both of them and their supposedly injured feelings—a preoccupation she adored in him—she let her attention wander over his dangerously aroused body.

All Ben had really done was gotten him good and ready. Ready for all three of them.

She loved Ben for that.

You’re welcome. Ben’s wry whisper sounded in her head. Since you’re feeling all grateful, angel, why don’t you shimmy over here and show me just how grateful you’re prepared to be?

Hells, the climate in here was so combustible the viewport was getting steamy.

Kaia swallowed hard past her dry and breathless throat.

Well, this is what you’ve been waiting for, isn’t it? All three of your men loaded and locked and lusting. Lusting for each other and lusting for you.

Heart thundering, she eased down the zipper of her sapphire-blue cybersuit. The soft buzz echoed like a shout in the suddenly supercharged silence. She unzipped just enough to reveal a hint of cleavage. Barely enough to entice.

Just a preview of things to come. But plenty enough to rivet all three of her men. Dex rumbled in her ear—a deep-throated hum somewhere between a purr and a growl that only she could hear.

She’d never heard him make that sound before. But damn if it didn’t kindle the slow heat building down below to a sudden slick need. A need for him so intense it made her weak.

She wanted him. She hadn’t had him in way too long.

And if not for the constraining presence of her kid sister sleeping in the room where he’d just found her, she would’ve already had him.

Tread softly here, samurai. All four of us are rigged to blow.

“Actually,” she breathed, “we’re both impressed. Both with your…natural talent…and your self-control under fire. Aren’t we, Dex?”

“Mmmm,” Dex agreed, easing her still closer, voice husky with arousal. “Precisely the same way we know Ben feels I’ve been ignoring him for the exigencies of my work—and that he’s consequently been in a towering temper all day. Haven’t we known, darling?”

“He is my lifemate,” Kaia agreed, leaning into Dex and rubbing into all that heat he was packing. Because her own self-discipline wasn’t worth a damn wherever Dex Draven was concerned. “So, yeah, I pretty much had a front row seat for that whole seduce-a-pirate scenario you’ve both been rocking. Which was fairly distracting while I was coaxing my sister to sleep. Which I did finally manage to do.” She flashed a grin. “We won’t see her till morning.”

Behind her, she knew, Dex was borderline annoyed with Ben for acting out this way. He’d muttered as much under his breath while he was hustling her from her sister’s well-secured quarters down the hall straight here.

But she also sensed Dex’s deep satisfaction that Ben felt as kid-with-a-crush possessive over Dex’s time and attention as he obviously did.

Even without Dex’s hot mouth nuzzling her neck and his rigid shaft nudging her ass.

Hair tousled in sandy spikes over his brow, Zorin watched them both with sexual promise burning like lava in his eyes. Obviously trying like hell to pull his head together.

Which suited her fine. She wanted him. Wanted all of them. She’d wanted them forever.

Tonight, she was finally going to have them.

All three of them.

“Thanks for the sit rep on Junior.” Her pirate shot her a rueful look and cleared his throat. “What I’m trying to say is, uh, this isn’t what it looks like. We were gonna stop.”

Ben snorted and rolled his eyes.

No, we weren’t. For punk’s sake, Zorin. And if you’re waiting for Dex’s permission to know what it feels like to have my mouth wrapped around your disco stick, big guy, he just flipping gave it. Are you ready for me now?

When Ben tried casually to straighten from the wall, Zorin tightened his grip on his shoulder to hold him there. And slanted him a look so menacing it sent a shaft of raw craving straight to Kaia’s already tingling clit.

“You’ll stay right there till I’m done with you, gorgeous. If you know what’s good for you.”

At least in private.

Um, how about a little help here, angel?

With one last wiggle of her hips against his joystick just to keep him thinking about her, Kaia slipped out of Dex’s arms. She sauntered across the floor, one hand trailing across Zorin’s broad back in greeting as she wandered past.

Her pirate finally released Ben to slide his hand through the loose side ponytail spilling over her shoulder—a slow caress that heated her whole body.

She met his hot gaze with a sidelong smile. “Miss me?”

His heartfelt tone made her grin. Reaching Ben’s side, she looped her arms around his neck to purr in his ear.

“Ben Nero, you are such a bad boy. You’ve got Zorin ready to come in his pants.”

“Yeah, well, that makes two of us.” Ben pulled her in for a kiss that crackled with sexual frustration. “Someone had better be fucking me in about a nanosecond. Right now I’m not too choosy about which one of you gets me off. Looks like you’re first in line, angel.”