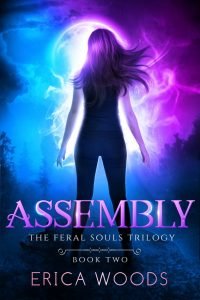 Some secrets are unforgivable, some betrayals cut too deep. And this time… This time I may lose them forever.

The Assembly is no place for a human.

Especially not one standing trial. Surrounded by lycans who’d like nothing more than to see me dead, forced to participate in lethal games and hunted by enemies shrouded in shadows, my world is unravelling. The only thing keeping me sane is the four possessive wolf shifters ready to sacrifice everything to keep me safe.

But when faces from the past return, the fragile trust I’ve built with my wolves is shaken to its core, and all the terrible secrets I once did everything to keep are clawing their way to the surface.

Out of time, I’m forced to make a choice. A choice that might cost me everything.

“You disobeyed,” he said in a voice of velvet-wrapped razors. “You were almost killed. Again.” The last word was bit off—an animalistic sound disguised by a veneer of cracking civility.

“I…” I edged back, only stopping when rough wood scraped against my bared skin, reminding me of my torn shirt, my discarded vest, the unwanted touches that had briefly eroded my sense of self.

“I, I,” he mocked. Another step and he was looming above me, caging me against the tree by putting his bloody hands at the sides of my trembling face. “One would think a disobedient little female would have words tripping off her tongue in her haste to reassure the male she has worried so.” He cocked his head and lowered his voice until it was a silken purr. “But perhaps the danger thrills you. Perhaps you wish for us to worry.”

“No!” The denial was quick and furious. “I would never want that!” Silently pleading, I stared up at the savagely beautiful male. Had it been only a few hours ago that I wondered what lurked behind his cool facade, what lay beyond the icy wall he’d built with such painstaking care?

“No? You do not wish to test your males? You do not require visible proof of our care, of our protection? Tsk, tsk,” he added when I tried to draw away. The sounds were harsh against the silence surrounding us. “I did not say—” His mouth snapped shut, his eyes narrowed and flashed. “What,” he hissed, “is this?”

Trapping my chin between his thumb and index finger, his touch a light butterfly kiss, he turned my head. Stared. “Blood.” His nostrils flared. “Your blood.”

“No wound.” He gently tilted my face this way and that, voice too quiet. “Not a single scratch, but blood.” He cocked his head, his breathing so soft I barely noticed when it stopped. “Did they hit you?”