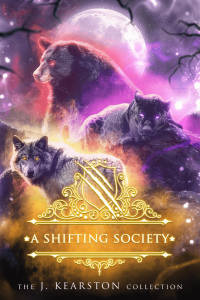 *This contains all three standalones from my contribution to the Shifting Society shared universe: Destined to Run, Destined to Strike, and Destined to Dream*

I refuse to be a pawn.

My father sees me as nothing more than a thing to trade for more wealth and power, but I’d rather die than live the life arranged for me. I need to escape, and when a half-dead shifter climbs through my window, I may just have the perfect excuse. If this stranger is found, he’ll be slaughtered, but hiding him would spell my doom.
I can’t let this man die simply for what he was born as. We need to run, get him back to his pride, and hope I can convince them to hide me.
From the moment I was born, I was destined to run. I just pray I’m fast enough to outrun my fate.

Whether or not I’m ready for the world to change, it already is.

I’m used to life on the streets, but not so much on the run. When I stumble across a secret worth killing to protect, I’m forced to seek refuge in the only place humans don’t dare to go; if I even survive that long. Yet the men I meet there are convinced we can’t hide forever, that the only way I can truly have any sort of life is by ending this.

From the moment I was shot, I became destined to strike. With only one chance at pulling this off, I just pray that I hit hard enough to keep them down.

The path to peace is paved in blood.

I wasn’t even given the mercy of being left for dead in that alley. One choice after another was savagely torn away from me as a monster dragged me into the supernatural world kicking and screaming, forcing me to become a murderer.

I’m finally ready to let go of my past, but it’s not willing to return the favor, shattering the tentative peace I’ve started to find. I’ve paid my pound of flesh ten times over by now; I shouldn’t spend the rest of my life being punished for something that was never my fault to begin with. But when you have as much blood on your hands as I do, how can you be anything other than damned?

Yet the Fates didn’t send a reaper to claim my soul, they sent three men that see me as more than my numerous sins.

It’s about time that I prove I was worth saving.