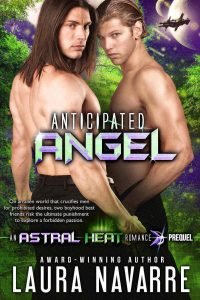 On an alien world that crucifies men for prohibited desires, two boyhood best friends risk the ultimate punishment to explore a forbidden passion.

Nero: Dex Draven’s the most intimidating guy at our intergalactic next-gen leaders’ camp. And his psycho galactic tyrant of a dad has a crucifixion obsession. Our two races are deadly enemies, but Dex was my boyhood best friend. Suddenly he’s all grown up—and suddenly he can’t stop staring at me. I don’t know whether to be afraid that it’s all a figment of my telepathic imagination…or that every dangerous desire we’re forbidden to acknowledge is real.

Dex: I’m one combat-to-the-death away from the imperial command I’m determined to achieve. All I need to do is keep my junk in my pants. Besides, Ben Nero’s the most gorgeous, most maddeningly unattainable, most sought-after guy at camp. There’s no way he’d ever look twice at a buttoned-tight, hypercompetitive, compulsive overachiever like me.

Until the night I blunder in on Nero in the shower. Which is a total catastrophic mistake. Because letting Nero in close, the way I’m burning to do, means risking the ultimate punishment.

For both of us.

Apparently some god with a fondness for bisexual adolescent telepaths decided to take pity on Nero’s awkward dilemma and whisper a word of reason in Dex’s ear. With a chirp, the maglock released and the door swung wide.

“Finally.” Pushing out a breath, Nero strode into the moonlit darkness. “What the hells, Dex…”

His words stuttered to a stop.

In the narrow confines of the shadowy cabin whose angles and corners he knew by heart, Dex stood silhouetted against the viewport. Wearing nothing but an insubstantial pair of sleeping trousers that clung to his supple hips and spectacular ass.

The light of Paragon’s moons limned his broad shoulders and corded back and bulging triceps in a way that made Nero burn to sink his teeth in and just nibble his way down the guy’s body. Starlight flamed in Dex’s cropped golden hair and caressed the sun-bronzed skin Nero longed to trace with his tongue.

Nero sucked in oxygen to clear his damn head and felt his senses spin. He was already half-drunk on lotus pollen, a seductive sweetness like spicy sugar tickling the back of his throat. Now his head was reeling with the potent kick of Dex’s scent—that whiff of pheromones Mogadon males exuded that telegraphed aggression, territoriality, or arousal.

Nero ached to know which of those stimuli was driving Dex tonight.

Ferociously he fought back the temptation to shove aside his inconvenient ethics, peek inside Dex’s brain, and find out for himself. And screw his farking ethics and screw his best friend’s privacy.

And screw his best friend.

Between the chemical stimulant of Mogadon pheromones and the insidious high of night-blooming narcotic—not to mention the explosive orgasm Dex’s sudden appearance had thwarted—Nero was about two ticks away from launching into a rutting frenzy.

Stars and planets. I should never have followed him. Should’ve jerked off to fantasy Dex the way I’ve been doing all summer and just gone to bed.

An expectant silence stretched between them—a silence underscored by the shuss of the door sliding shut. Sealing them in.

Still facing the window, Dex twitched but didn’t turn. “Put the blaster on the desk and leave.”

Movements rough with annoyance, Nero unbuckled the blaster and tossed it where Dex wanted. Hoping like hells the thing went off and burned a hole in Dex’s Mogadon uniform, hanging proudly on display in his open closet. Coals of resentment smoldered in his chest.

“I’m not one of your imperial lackeys, Dex, trained from birth to snap off a salute and kiss your ruling-class Mogadon ass.” No matter how tempting that particular fantasy…not to mention that particular ass…might be to explore. “Look, I was gonna keep my mouth shut—I really was—but your sneak-and-peek in the shower pretty much made that impossible. We’ve been avoiding this all summer—”

“And we’re bloody well going to keep avoiding it.” Dex bristled with tightly controlled tension. “Leave the blaster and get out.”

With his head full to spinning with pheromones and his cock full to spilling with need, Nero felt his temper slip. He was the strongest junior-class telepath on Valyria, all but promised a seat on the ruling Senate of Psychics once he completed his studies. Earning that place to protect his embattled race—from Mogadon aggression—was his paramount ambition. This Mogadon prick might not be into him the way Nero burned for, but Dex damn well better show him some respect.

“You want me to leave?” Nero prowled up behind his obstinate friend, silent as a stalking snowcat, and whispered two inflammatory words in his ear.

Dex never could resist a challenge.

With a growl, Dex spun to confront him. Too fast to counter, firing with the lethal speed of a guy who’d been training for combat since he could crawl, Dex’s hands shot forward to shove him hard in the chest.

Still not attacking. Not yet.

Just determined as all seven devils to keep distance between them.

Nero wasn’t an imperial killing machine like Dex, but over the years, he and his best buddy had roughhoused plenty. Even as he went flying back through space beneath Dex’s brutal shove, Nero gripped Dex and dragged him forward. The hard frame of the bunk hit the back of Nero’s thighs.

He landed on his back across the unforgiving mattress with a grunt. A heartbeat before Dex’s solid weight landed on top of him.

Dex caught his own weight on his forearms a breath before his chest would’ve crushed Nero’s face.

An avalanche of sensory overload—all sweating skin and bulging muscle—poured through Nero’s overstimulated body. In a heartbeat, his central nervous system telescoped and magnified the star attraction in this circus.

The fire of physical contact burned through him. Nero barely bit back a moan.

Barely a cubit away, Dex scowled down at him, that hard-hewn face handsome enough to break hearts, burnished hair falling over thunderous brow. His electric eyes blazed through Nero like a cobalt current.

“Damnation, Ben! Have you lost your bloody mind goading me like this?”

“Yeah,” Nero rasped, well beyond caution and husky with need. “When it comes to you? Lost my bloody mind years ago.”

And even though he was ordering his rebellious body to behave, he couldn’t seem to resist…shifting just a tad…under Dex’s intoxicating friction. Flexing his hips to shove his own aching length, straining against his Valyrian silk breeches, right into the hard heat of Dex’s Mogadon cock.