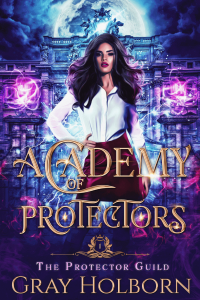 You know what’s annoying? Having your first real date interrupted by a werewolf and a hellhound.

Now that the monsters have invaded my small town, my family and I have to ditch our secluded cabin in the woods, and move to The Protector Guild. I’ve always dreamed of one day joining The Guild—a secret establishment of protectors that studies captured demons and trains to kill them—but the reality of this new life is nothing like I thought it would be. I blame superhero movies for making the whole saving-the-world thing look easy and fun.

Hunting monsters and kicking ass, I can handle; but when I’m forced to train with a team of mysterious protectors full of secrets and a haunting past, things get complicated.

Icing on the cake? For some reason, the monsters I’m supposed to be hunting are hunting me instead. If I can’t figure out who to trust and fast, I’m screwed. I always hoped that my life would get more exciting once I left home for greener pastures, but this wasn’t exactly what I had in mind…

“I can’t believe you’ve named a hellhound. And that you’ve named it Ralph.” The disembodied voice was low and deep and smooth, and I shuddered despite my fear.

In the room across from Ralph’s, a dark, imposing figure slowly made its way towards me, stopping just as it reached the glass that wasn’t glass. The glow from Ralph’s room reached a bit, and I could make out more and more of the mysterious creature, the closer it stepped into the light.

I held back a gasp. This wasn’t a creature, this was a man. And a beautiful one at that. Light, tousled blond hair framed an angular face. He was tall and built with lean muscle. But it was his eyes that had me captivated—they didn’t quite match. His right eye was a mottled gold, the left a dark brown. Watching my appraisal he lifted the left side of his lips in a smirk.

“What are you?” I asked. The options were limitless. Incubus, werewolf, vampire, or some less common demon that I’d never heard of before. Cyrus wasn’t big on explaining our world beyond ‘kill, decapitate, stab.’ And truthfully, his approach worked on all creatures, didn’t matter the specific species.

Something about the glint in the man’s eye, the lazy posture, and the confidence he exuded, despite being locked in a glorified cage, told me that this man—thing—was dangerous.

Instead of answering, he tilted his head, not unlike a cat, and stared at my neck. Feeling self-conscious, I pressed my fingers to the bandaged skin, while Ralph growled a soft, threatening warning behind me.

“You’ve been recently tasted, I see.” He continued his watchful stare, making me feel like I was the one being studied behind a glass wall. His lips stretched into a terrifying caricature of a smile. I felt my heartbeat increase its heavy drum. “And survived. How interesting.”